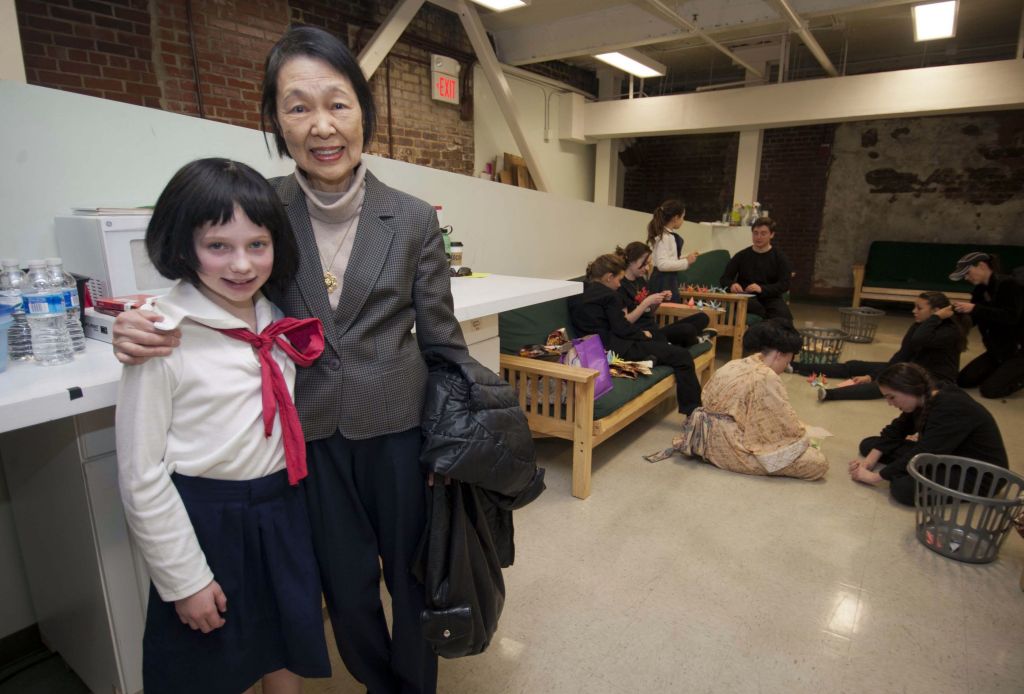 Piedmont Players Theatre’s “A Thousand Cranes” is the story of a young girl growing up in the shadow of Hiroshima. But to the young cast members, it’s become much more than that.
They’ve had the opportunity to meet Yoshiko Otey, who survived the bombing of Hiroshima.
And in between shows for the county’s fourth-graders this week at the Norvell Theatre, they were folding 1,000 cranes for her.
Otey and her husband, Fleming, a retired chaplain, met in Japan.
When Otey was diagnosed with lymphoma a few years ago, their daughter sent her a box of tiny cranes. It meant more to Otey than any words her daughter could’ve said.
The cast decided to do the same to wish her well.
In the play, the girl, Sadako, becomes ill 10 years after the bombing of Hiroshima.
She wanted to fold 1,000 cranes, based on the legend that doing so would restore her to health. She only made 644 before her death, but her classmates finished for her, making an additional 356 cranes.
Today, a statue in her honor can be found in Hiroshima — a cry for peace from children.
On Tuesday morning, after their first performance of the day (they did four shows a day this week), the cast sat and folded cranes and chatted and sang “Popular” from “Wicked,” all at the same time, as only energetic young people can do.
At 9 a.m., they’d performed for a house full of students, all sitting in hushed excitement, eager to see the 30-minute, one-act play.
Their admission ticket? A folded crane.
There were already hundreds of colorful cranes decorating the lobby.
Director Reid Leonard said the lobby would be full of cranes by the end of the week. Theoretically, he said, the cast could give three people 1,000 cranes each — in addition to the 1,000 they were making for Otey.
“We’re in the healing business now,” Leonard said. “It’s one of the things this cast never expected.”
You never know exactly where a show will go, Leonard noted. “You just launch it and hope.”
Downstairs, the cast worked busily before time for the next performance.
Each cast member dropped a completed crane into his or her own small, plastic laundry basket. The Oteys stood nearby, looking on with gentle smiles.
Pastor Otey has seen the play more than once.
“It’s just as strong each time,” he said.
Seeing the play for Yoshiko Otey has been emotional but healing, she said. “It’s been such a long time. It’s like waking up from a dream.”
Following treatment, Otey is doing well. She continues to fold cranes and give them away. Pastor Otey places a mustard seed in some of them.
As Jesus tells his disciples in Matthew 17:20, “For truly I tell you, if you have faith the size of a mustard seed, you will say to this mountain, ‘Move from here to here,’ and it will move; and nothing will be impossible for you.”
The couple marveled at how fast the children were working.
“The children have learned to do this so quickly,” Yoshiko Otey said. “They’re going a great job.”
“Suddenly,” Leonard said, “the play means more. Art is not just about applause. It has a history. There’s a lot of good things in it.”
Bayleigh Grace Miller, a fifth-grader at Woodleaf Elementary School, shares the role of Sadako with Erwin Middle’s Macy Abramson.
“I was excited and a little nervous at first,” Bayleigh said as she folded. “Whenever there’s a big crowd, I just do my best. I’ve learned a lot.”
Bayleigh met Otey, and the older woman gave her a crane made from a dollar bill.
“I was really excited she gave me that,” Bayleigh said. “It was kind of like a connection between me and her. I’m Sadako, and she’s Sadako, too.”
Public performances of “A Thousand Cranes” conclude today at the Norvell Theater at 2:30 p.m. and 7:30 p.m.
For ticket information, call 704-633-5471.