Warren goes off on Pittsburgh 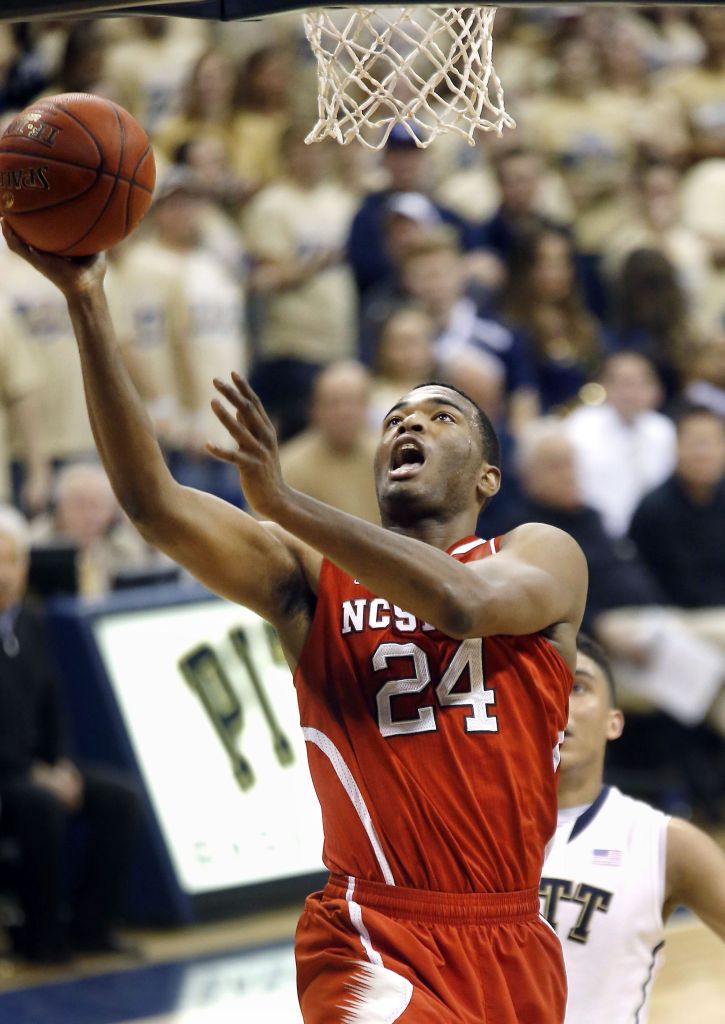 PITTSBURGH — T.J. Warren scored a career-high 41 points and N.C. State surged past Pittsburgh 74-67 on Monday night.
Warren’s eighth 30-point game of the year gave the Wolfpack’s flagging NCAA tournament hopes a needed boost. N.C. State (18-12, 8-9 ACC) won for just the second time in its last six games, riding Warren for much of the second half.
The ACC’s leading scorer made seven straight shots at one point and finished 16 of 22 from the field. His emphatic dunk in the final seconds sealed it.
The Wolfpack came in having lost four of five, including brutal one-point losses to Syracuse and North Carolina. There would be no late collapse this time.
Josh Newkirk led Pitt (22-8, 10-7) with a career-high 20 points but the Panthers had no answer for Warren.
Not that Pitt didn’t try.
The Panthers threw a series of players at Warren, from Lamar Patterson to defensive specialist Cam Wright to power forward Jamel Artis. They even mixed up the defense, running zone at some point while mixing in a little man-to-man and the occasional double team.
It hardly mattered, though Warren didn’t exactly do it alone. Lennard Freeman added 10 points off the bench and provided a physical presence the Wolfpack used to bully Pitt around on what was supposed to be a celebratory Senior Night for Patterson and Talib Zanna. Patterson finished with 17 points but made just 7 of 12 at the free throw line.
The Wolfpack outrebounded Pitt 35-23, including 13-2 on the offensive glass. It led to a 16-0 advantage in second-chance points, including a pair of clutch baskets in the final minutes as the Panthers turned away one last-gasp comeback after another by the Panthers.
Pitt led by as much as 13 in the first half but struggled to put away the Wolfpack.
The Panthers controlled play for long stretches in the first half but only led 36-31 at the break, with the Wolfpack doing their best work when Warren finally got some help. Pitt appeared on the verge of blowing out N.C. State only to get sloppy at the end of the half.
The Wolfpack used a late 8-0 surge to cut into a 13-point deficit, beating the Panthers at their own game. N.C. State dominated the lane, pushing Pitt around with relative ease.
A runner by Warren gave N.C. State its first lead of the second half at 48-46 and then followed it up by drilling a 3-pointer from the top of the key.
Warren’s 41 points were the most by an N.C. State player since Rodney Monroe scored 48 against Georgia Tech in 1991.
The Panthers could never quite catch up. Several times they trimmed the deficit to a single point and each time N.C. State answered. A 3-pointer just before the shot clock buzzer by Warren made it 69-65 Wolfpack and he added a 15-footer that bounced off the rim and in.
Pitt would get no closer, and when a late Pitt turnover freed Warren up for a fastbreak lay-up, the only sound was the roar of a small batch of Wolfpack fans who whooped it up as Warren’s teammates celebrated.