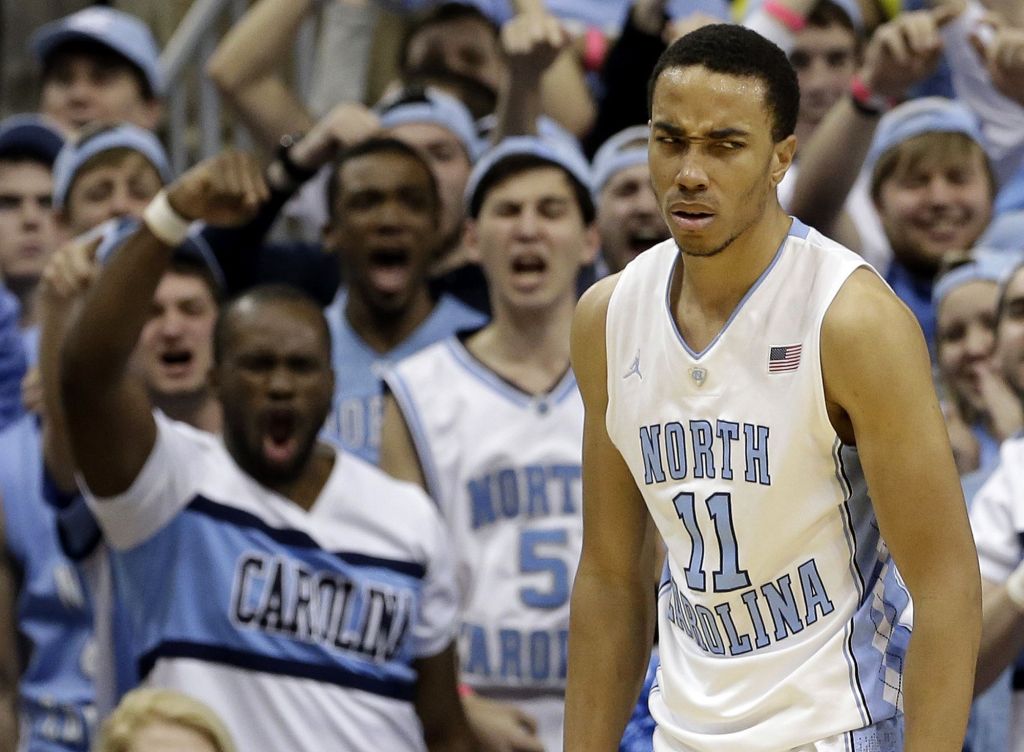 CHAPEL HILL — North Carolina just keeps winning, even if the past two performances haven’t been what coach Roy Williams wanted to see.
For the 14th-ranked Tar Heels, the question is whether two straight close wins against teams from the bottom third of the Atlantic Coast Conference standings is a concern or just a blip headed into Saturday’s finale against their fiercest rival.
James Michael McAdoo hit the go-ahead shot in the lane with 3:09 left and Marcus Paige blocked Eric Atkins’ driving shot on the final play to seal UNC’s 63-61 victory over Notre Dame on Monday night, earning the Tar Heels their 12th straight victory in their last home game.
While the Tar Heels (23-7, 13-4 ACC) have their longest winning streak since 2008-09, it marked the second time in three days they found themselves in a fight with an underdog opponent. They won 60-56 at last-place Virginia Tech on Saturday, then blew a 14-point halftime lead and had to fight to the horn to beat the Fighting Irish (15-16, 6-12).
“I said Saturday to have a really good year you’ve got to win some games ugly,” Williams said. “I’m tired of winning games ugly. … I really thought we’d have a tremendous sense of urgency today. We played so much harder at practice yesterday than we did in the game today. We learned those lessons earlier in the season but we’ve let them slip by us here the last couple of games.”
Still, the Tar Heels haven’t lost since Jan. 20 at No. 5 Virginia when they were just starting their climb from an 0-3 ACC start. They close the regular season this weekend at No. 4 Duke.
The Tar Heels did just enough down the stretch Monday, with Paige — one of the ACC’s best free throw shooters at 89 percent — shaking off two missed free throws in the final 20 seconds to knock away Atkins’ final drive just before the horn.
“I just was in the right help spot, and it would’ve been a tough shot anyway,” Paige said. “I wanted to do whatever I could to help and I was in the right spot. I had to make up for missing a couple of free throws.”
Atkins, who scored 21 points to lead Notre Dame, didn’t see who blocked his shot.
“I got so deep in there and it was so late that I was thinking that if I passed it, the time might have run out,” Atkins said. “I didn’t want to risk not getting up a shot.”
McAdoo finished with 14 points to lead the Tar Heels, while J.P. Tokoto added 11. But Paige, UNC’s leading scorer who had a career-high 35 points and the last-second layup to beat North Carolina State last week, managed just seven points on 2-for-8 shooting.
Notre Dame, playing without senior center Garrick Sherman due to a hand injury, closed its regular season with two straight tough losses. The Fighting Irish lost 85-81 in overtime to Pittsburgh on Saturday and won’t play again until next week’s ACC tournament in Greensboro.
Pat Connaughton had Notre Dame’s first 10 points of the second half and finished with 17 points and a season-high 13 rebounds despite a sore left ankle.
Notre Dame used a 22-5 run out of halftime to erase the 41-27 deficit and go ahead midway through the half. The Fighting Irish led 56-55 before McAdoo’s basket started a 6-0 burst, with Brice Johnson scoring inside and Tokoto adding a jumper to beat the shot clock for the 61-56 lead with 1:28 left.
But Connaughton’s three-point play with 52.1 seconds left cut the deficit to a basket, then Atkins followed Paige’s first missed free throw with a driving layup to cut the lead to 62-61 with 8.6 seconds left. Paige made 1 of 2 free throws with 6.6 seconds left to give Notre Dame its final shot.
Notre Dame shot 54 percent from the field in the second half, while the defense limited UNC to 22 points — matching the Tar Heels’ season low for a half — and just one second-chance point.
“It’s something that we’ve been trying to build on throughout the season,” Connaughton said. “If you look across the board, we’ve been in a bunch of these games that we’ve lost. It’s something that we’ve got to kind of take with us to Greensboro and then just get over the hump.”