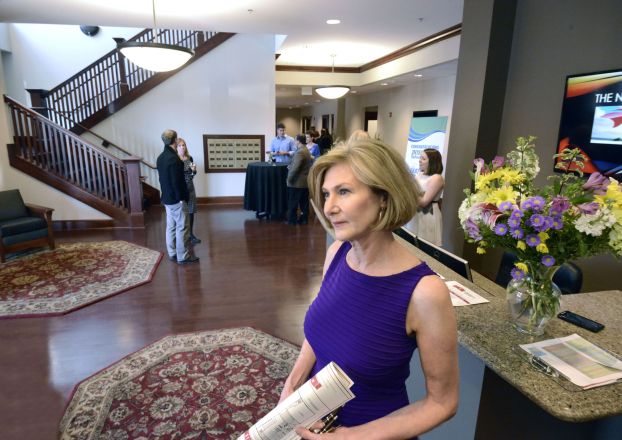 SALISBURY — The Salisbury Business Center, which includes Integro Technologies as its largest tenant, had a coming-out party Saturday afternoon.
As invited guests toured the building at 301 S. Main St., there was definitely a wow factor.
The visitors took in spaces from the 76-seat auditorium for training to Integro’s upstairs conference room, where 22 high-backed chairs and large meeting table were flooded in natural light.
“I fell in love with this space the first time I saw it,” Integro founder and Chief Financial Officer Tom Campion said.
Integro Technologies owns the Salisbury Business Center at 301 S. Main St., and while Integro occupies two-thirds of the 41,800-square-foot building, the company also has more than 10,000 square feet available for lease.
So far, “key-man” office suites have been rented out to attorney Terry Duncan of Charlotte and Seth Waller of Falcon Investment.
Campion said there is high interest in the first-floor, 1,800-square-foot space on the corner of South Main and East Bank streets.
And the southern end of the building offers flexible, 4,800-square-foot areas on the first and second floors.
Those wide-open spaces are “warm shells,” waiting to be configured in ways demanded by future tenants. They have insulation, but no dry wall yet, though interior construction elements such as walls and cubicles could go in quickly.
Both top and bottom spaces feature up to 13 windows.
The Business Center tenants and Integro employees share an upstairs break room, which includes an enviable kitchen with dark cabinets, stainless steel appliances and granite counters.
The downstairs also affords tenants a small conference room, video conferencing, access to the city’s fiber-optic cable system, a shared lobby and reception area, storage, a lobby alcove and bathrooms.
Besides Duncan Law and Falcon Investment, there’s a third key-man office suite for lease. The Business Center has a receptionist, and general manager Sharon Baker is on site during the day.
Baker said tenants want to know someone is going to be in the building and available.
“We saw that as being a necessity,” she said.
The tenants also have access to the building and their individual offices after hours. The large spaces for lease next to East Bank Street and on the southern end of the building offer direct entry from the outside.
But again, Integro Technologies is the anchor. Its two-story-high back shop takes up half of the building.
Integro’s footprint on the first floor also includes the auditorium, a high-tech lab, another kitchen, storage rooms and a workout room. The loading dock in back can accommodate deliveries from an 18-wheeler.
On the second floor, Integro has provided room for 13 individual offices along the outside of its large suite, with 10 cubicle work spaces in the middle.
Integro President Shawn Campion — Tom’s brother — has been the face of Integro Technologies in Salisbury for several years.
The company’s facility here started out on North Lee Street but has made the complete transition now to the new Salisbury Business Center.
The project cost $3.2 million, after the company bought the property from the city of Salisbury for $250,000.
Tom Campion still works out of his home in Chambersburg, Pa. A third principal in the company is Starke Farley III of South Carolina. He was also on hand for Saturday’s open house.
Tom Campion watched the building’s progress over the past year through a web camera attached to the top of the Kress Building across the street.
“It came out of the ground like a plant,” Campion said. “… It’s amazing. You can’t imagine how much blood, sweat and tears went into it.”
The parking lot has yet to be completed, but crews were grading up to 3 p.m. Saturday.
Founded in 2001, Integro describes itself as a full-service machine vision and ID integrator for a wide range of industries.
Industrial clients depend on Integro to solve some of their more complex problems.
Integro often does work for Fortune 100 and Fortune 500 companies. Now, when representatives of those firms visit the Integro headquarters, “we can take them to a showplace,” Tom Campion said.
The auditorium has an 18-foot diagonal screen as its modern-day blackboard in front. The sharply tiered seats and work spaces provide all manner of technological plug-ins.
The auditorium already has provided training for Mitsubishi Electric and Cognex. Tom Campion said the training auditorium employs the best attributes of what the company has seen elsewhere.
Integro does a lot of proprietary work for its customers, so visitors were not allowed to take photographs in the shop area.
KMD Construction of Salisbury was the project’s general contractor; Gray Stout of Salisbury, the architect.
“I think it’s fabulous,” Salisbury City Councilwoman Karen Alexander said Saturday after touring the Salisbury Business Center. “… It’s something we can really be proud of.”
Alexander added how important it was for a small town to have a significant construction project in its downtown, especially for a 21st century company such as Integro.
With its Fibrant utility, Salisbury also has positioned itself to meet the demands of new technology, and Alexander sees it as part of the city’s future branding — one that, like Integro, is all about achieving excellence.
Alexander said Shawn Campion also is ahead of employee additions promised for the project. Integro, which now employs 29, has hired seven new workers and is taking resumes for five other positions, Alexander said.
A Salisbury Post advance story Friday stated Saturday’s open house would be open to the public, though it was an invitation-only event.
Tom Campion said he hoped not too many people had to be turned away and apologized for any confusion. Still, it was a good coming-out affair.
“We can’t wait to get back to business,” Tom Campion said.

Writing about Cotton Ketchie is like writing about an old friend you haven’t seen in years, who after meeting again,... read more