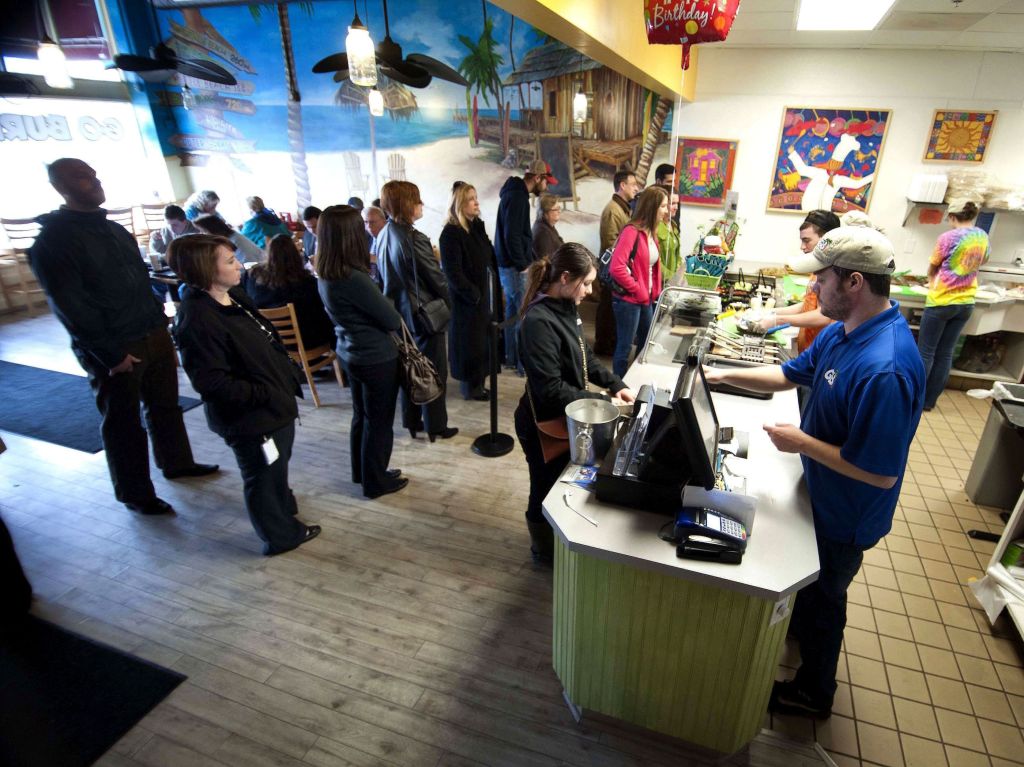 SALISBURY — Go Burrito in downtown Salisbury celebrated its first birthday last month by winning the 2013 award for best building renovation from the city’s Community Appearance Commission and selling a record-setting 406 burritos in one day.
Go Burrito opened in the renovated Carousel Cafe building at 115 W. Fisher St. on Feb. 22, 2013. Owner Mikey Wetzel, a video game designer from California who had never owned a restaurant before, bought the building for $100,000. He then sunk an additional $600,000 into renovations, including a dog-friendly outdoor patio and the city’s first rooftop bar.
Go Burrito should reach $1 million in annual sales within the next year or so, Wetzel said.
“We receive tons of requests to franchise, but we still want to improve our concept before we get ahead of ourselves,” he said.
The night before the one year anniversary, the 3,000th fan liked Go Burrito’s Facebook page.
The previous one-day burrito sale record was 385, set last spring when the restaurant only sold burritos. Now the menu includes salads, quesadillas, nachos and tacos.
“Many people still don’t realize that Go Burrito is not a chain, and that we created the concept from scratch without any previous restaurant experience,” Wetzel said.
Wetzel said his inexperience kept him from securing financing for his venture, so he bought the building using a traditional mortgage and launched the restaurant with “well, every penny I own.”
“The heroes in the financing story are the bankers who believed in me,” he said, thanking Mark Lewis and Shane Wolford.
Architect Gray Stout deserves the credit for the rooftop bar concept, and general contractor Chad Vriesema and Central Piedmont Builders “made magic happen in a very tricky place,” Wetzel said.
He said former Downtown Salisbury Inc. leader Randy Hemann was instrumental to the restaurant’s success, as well as the city of Salisbury.
“People may not realize how many individuals it takes to collaborate to make something like this happen,” Wetzel said. “As people may remember, it was a bumpy ride.”
Renovating the 114-year-old building took about a year and a half, but construction was delayed for months due to Wetzel’s infamous problems with the county’s permitting process.
Go Burrito became a prime example of the frustration of developers who want to reuse old buildings in downtown Salisbury. In the aftermath of Go Burrito and several other construction projects that were significantly delayed, Rowan County revamped its building code enforcement department to be more business-friendly and help developers find safe but creative ways to rehabilitate vacant buildings.
Central Piedmont Builders basically rebuilt the entire interior of the restaurant from the new roof to the concrete floor, installing massive steel beams to support the rooftop bar.
Crews salvaged as much original material as they could, including hardwood floors on the second story, brick walls, plaster walls and all windows.
Wetzel moved to Salisbury by way of Seattle where he was happily employed at Microsoft since 1996, working on Xbox and video games.
In early 2012, Wetzel helped his sister look into opening a candy store in downtown Salisbury. While looking for small storefronts to lease, they came across the former Carousel Café.
“Being the math nerd that I am, I was crunching the numbers and a restaurant would be a large investment but with a larger payoff, so that option started consuming my thoughts,” he said.
Wetzel said he and his wife, Lily Woo, always wanted a burrito restaurant in town.
“Well, the Carousel building was perfect, and I kinda wanted a plan B for my day job and future retirement, so we made the boldest move of our life — sell everything and a buy a historic building that, frankly, was in dismal shape,” he said.
They started researching, planning and even branding. Woo came up with the name and slogan “Go Fast. Go Fresh. Go Burrito!”
Wetzel hired 20 employees and started developing recipes and figuring out “how to crank out about 500 pounds of food per day in that tiny little kitchen, and how to manage a line that routinely goes out the door,” he said.
All the food is fresh. The restaurant does not have a freezer and has food delivered every other day. Eight salsas are homemade, and the burritos are toasted on a pannini press.
A full-service bar on the second floor offers live music, karaoke and Pong tournaments.
Wetzel is planning for Go Burrito’s second year and beyond.
“We have lots in mind,” he said.
New offerings like fish tacos, salsa contests, a tiki bar on the roof and more pre-set menu options such as a San Diego burrito or a Greek chicken burrito. Wetzel also wants to tackle an expanded bar menu, theme parties and “catering, catering, and more catering,” he said.