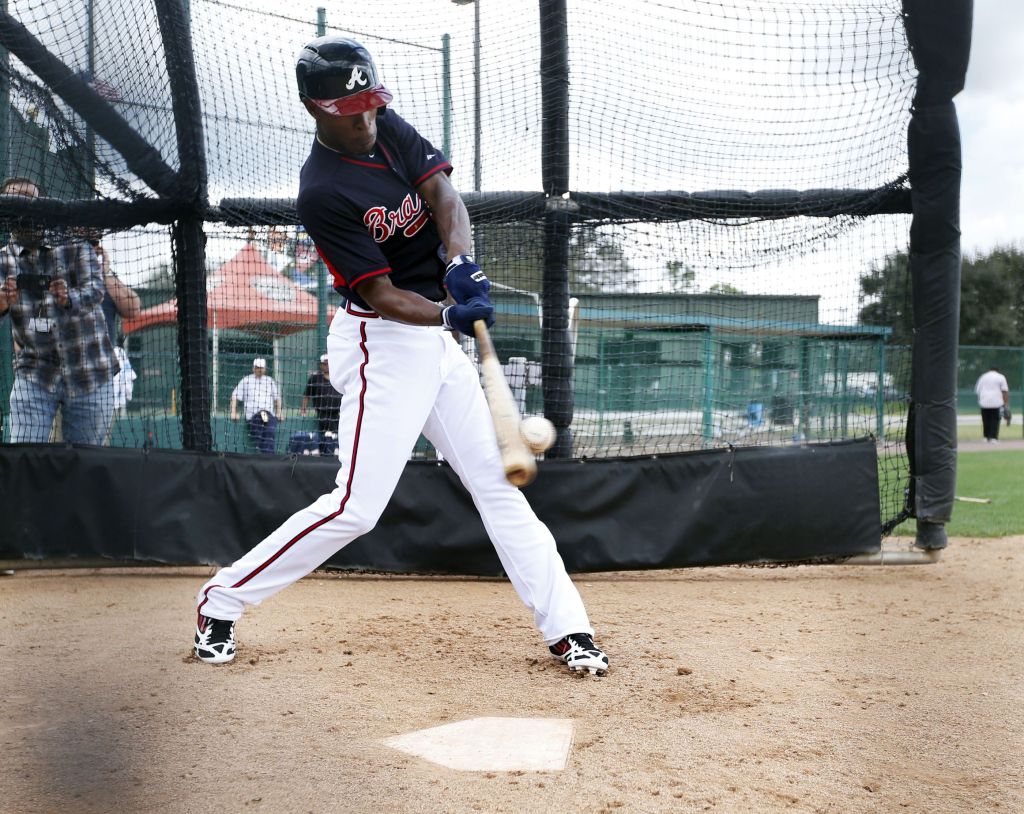 KISSIMMEE, Fla. — B.J. Upton was suffering through the most dreadful season of his career and little brother Justin was in the same Atlanta clubhouse, a perfect shoulder to lean on as he navigated through the unfathomable time.
But he didn’t seek comfort from him.
In fact, he didn’t reach out to anyone for help.
“It was difficult, but I’m kind of a loner,” Upton told The Associated Press, his gaze fixed skyward as he sat in the dugout on a recent dreary day in spring camp. “I handle things my own way. That’s just kind of the way it is.”
Justin is three years B.J.’s junior, shorter and stockier, but in his face and the timbre of his voice, the resemblance is unmistakable.
The younger Upton shook his head when asked if it surprised him that B.J. didn’t ask for his support when he dealt with hitting just .184 and being benched in his first year with the Braves. The season-long slump came after he signed a five-year, $75.25 million contract.
“Nobody’s going to help you fix yourself,” Justin said. “People take that a little too far, I think. Until something clicks with you in your mind things won’t go the right direction. You have to fix yourself before anyone else can.”
OK, but surely B.J. talked to his parents, with whom he’s very close, about his problems.
Nope.
Not his mother and not even his father, Manny “Bossman” Upton, his namesake and the reason the man born Melvin Emanuel is known as “Bossman Junior” or simply B.J.
“What could anyone really say to me? None of them had gone through what I had gone through last year,” he said. “Nobody could relate, so I dealt with it on my own.”
So he’d trudge home following each bad game and try to sort through things solo.
“I’d go home and regroup and come back the next day to work and try to fix it,” he said. “It just never panned out.”
The center fielder’s distaste at confiding in anyone about just how much his struggles bothered him didn’t stop scores of people from offering unsolicited advice. It seemed there was someone at every turn with a proposed solution to his woes.
“And that’s the problem,” he said, “everybody wants to throw in their two cents all the time and you start trying to listen to everybody and before you know it you’ve got 100 people in your head. And you’re trying to play with him telling you something and him telling you something, and you just kind of take it with you to the field.”
The 29-year-old, who was the second overall pick in the 2002 draft by Tampa Bay and made his major league debut at just 19, doesn’t fault those who reached out to him. But, he believes at almost 30, he should be able to handle things alone.
“They want to help, but I just think sometimes you can get too much information and that’s kind of what happened,” he said. “It just kind of snowballed. I started off struggling, kind of hit the panic button and it never stopped.”
His contract was the biggest ever given to a free agent by the Braves, a fact that Upton said led to a “bad situation.” He was so busy striving to live up to the expectations put on him by such a huge deal that he let it affect his play.
But lofty expectations aren’t anything new for Upton, who was touted as a five-tool, game-changing player when he was drafted out of high school. He became a key starter for Tampa Bay, hitting seven home runs in the postseason when the Rays reached the World Series in 2008, becoming the first player in franchise history to hit for the cycle a year later and stealing more than 40 bases in three consecutive seasons.
Despite those accomplishments he remained a prime target for criticism in part because he was never exactly what he was predicted to be as a teenager.
He narrows his perpetually sleepy eyes and something (anger? annoyance?) briefly flashes across his face at the mention of “five-tool player.” It’s evident he’s grown weary of shouldering outside expectations of what he should or shouldn’t be.
“All of that. I’m over all that,” he said after a deep breath. “I’m just like, ‘Leave me alone and let me play. Just let me play the game. Stop putting a number or tag on something of what people expect. Just leave me alone and let me play. I’ll be fine.’”
Braves manager Fredi Gonzalez is someone who is perfectly comfortable with not putting too much pressure on Upton. So what would he consider a successful season for Upton after his disastrous debut with the Braves?
“Just a good, solid year,” Gonzalez said. “Something that he would have on the back of his baseball card, something that he’s done prior to last year. Those numbers are pretty good.”
Indeed they are. In eight seasons with the Rays, he hit a combined .255 with a .336 on-base percentage, and piled up 232 stolen bases with 118 homers.
When Upton discusses 2013, he does it with a dismissive tone, certain it was simply an aberration — his rock bottom he’s sure to rise from this season.
“Last year was done a long time ago,” he said. “I’m just not really worried about anything. I don’t know if that’s a bad thing. I’m just like: ‘Whatever.’”
And for him a long time ago wasn’t during some quiet reflection this offseason. No. He let the negativity of last year go as the Braves took the field for the NL division series against the Los Angeles Dodgers.
“When I started sitting the bench in the playoffs — I went from starting to a defensive replacement,” he said.
It was then he made a vow to himself.
“This won’t happen again,” he told the only person he relies on for guidance. “I know it won’t happen again.”