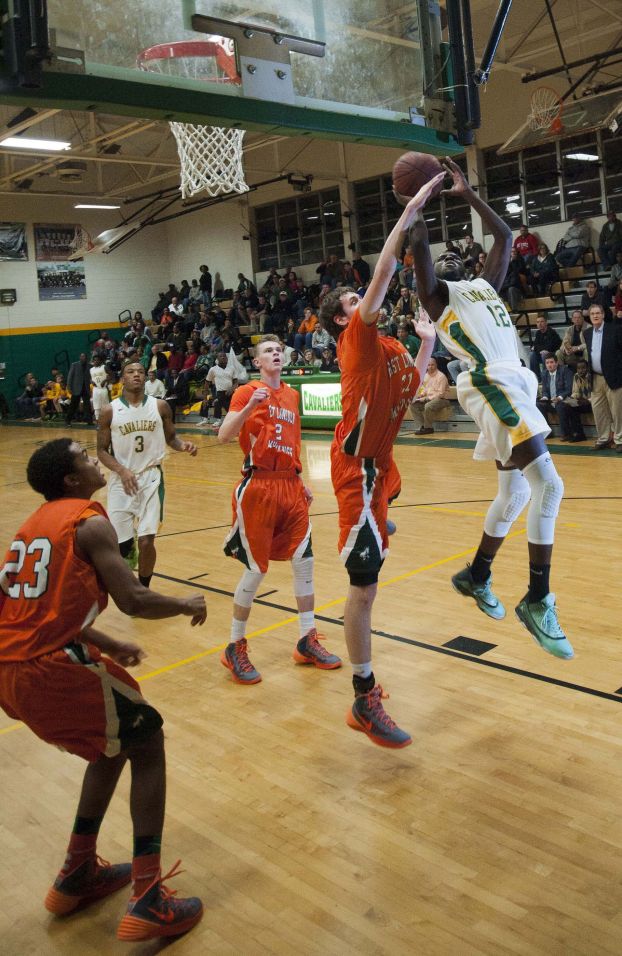 SPENCER — Leading up to North Rowan’s showdown against fifth-ranked East Lincoln Wednesday night, senior Michael Connor was confident.
He told head coach Andrew Mitchell all day “We got you, Coach, we got you.”
And Connor is a man of his word.
The senior orchestrated a personal 13-0 run over a 2:06 stretch in the fourth quarter — highlighted by three daggers from behind the arc — as the Cavaliers took control of the second-round playoff game en route to a 65-62 victory.
“I have to let him know that he is a man of his word because he told us not worry,” Mitchell said. “He stepped up at one of the biggest times in one of the best games I’ve seen him play.
“I just really appreciate the young man,” he continued. “First, he’s one of the best kids you’ll ever met. And he’s a competitor. When he came to the bench, he told us that we weren’t losing this game. He went back out and did his part.”
Trailing 47-45 with 5:08 to play, Connor sank a pair of free throws to bring North even before draining a trey in the left corner to put the Cavs up three.
After a Jalen Sanders block, he buried another three to send the packed house into a frenzy, forcing the Mustangs to call a timeout.
Coming out of the break, Connor continued his flurry, stealing a pass and knocking down two more from the line.
He capped the spurt with a wide-open trey from the elbow to put North ahead for good, 58-49 with 2:42 to play.
“I knew I had to step for us to win this game,” Connor said afterwards, all smiles. “I knew this was going to be my last time playing in this gym, and going out with a loss would have hurt a lot. So I was out there giving my all for my last time playing in this gym.”
But even after Connor’s spurt, the Cavs had to hang on as East Lincoln charged back.
Charlie Hills hit three big putbacks while the Mustangs shot 5-for-9 from the free throw line in the final 2:30 to cut it to four twice and down to three (63-60) with 28 ticks remaining.
But Alexis Archie came up clutch at the stripe for North, sinking all four of his attempts, as the Cavs hit 7-of-12 tries down the stretch to pull out the victory.
“They’re No. 5 in the state and I know exactly why,” Mitchell said. “I told the guys that we beat a really, really good basketball team.”
Connor recorded his sixth 20-point game of the season with a game-high 26 points — including 17 in the fourth quarter alone. Sanders had a huge game while conducting the Cavalier offense with 15 points, five steals and a pair of blocks before fouling out in the final frame.
“Jalen is a warrior and is our primary ball-handler,” Mitchell added. “So when he went out, I think we got rattled a little bit. But I thought Alexis Archie, Josh Handy and Paris Hillie were really good filling in for him by committee.
“It’s really comforting to know that you have players that can come in and step in and do a great job.”
After getting past the No. 5 team in the state, North heads to top-ranked Shelby for the third round Friday.
“We understand that they’re No. 1 in the state, and that’s great motivation for us,” Mitchell said. “But our guys will be ready to play.”
“We’re going to go out there and give it all we got,” Connor added.