Novant breakfast message: Be proactive, not reactive, in managing your health 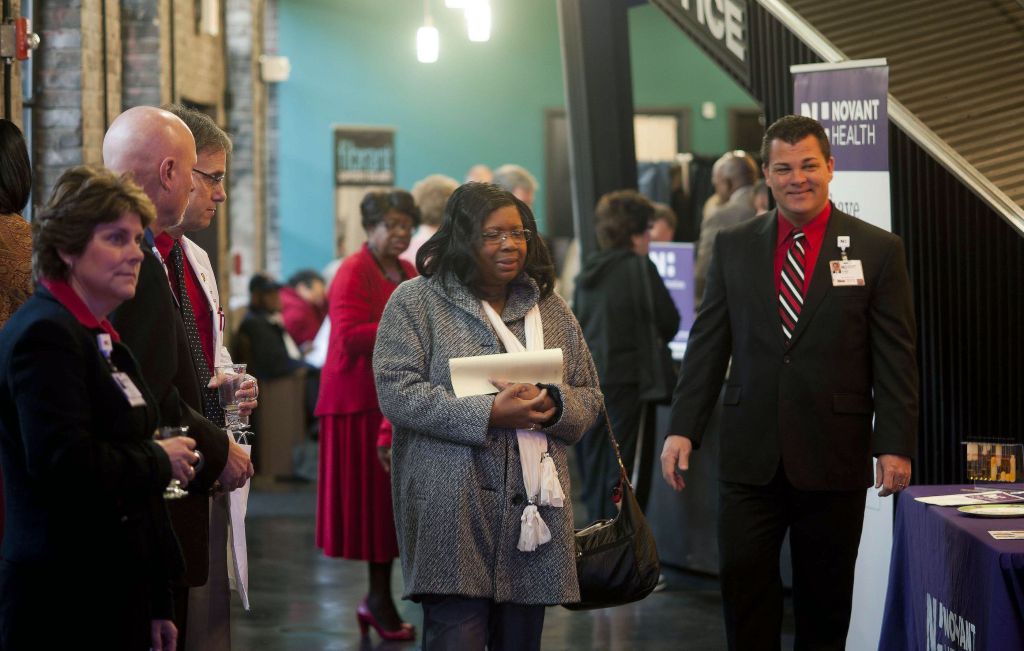 SALISBURY — A couple of years ago, Thomasina Paige was dusting when she found herself short of breath. So she asked her doctor for a stress test, and passed with flying colors. She didn’t think a lot about it when it happened a second time. In August 2012, Paige had a heart attack, followed by quadruple bypass.
Testing alone, noted Dr. Brian Fazia, can’t tell the whole picture of a patient’s heart health. “Stay in touch with your doctor if you have chest discomfort. You may need a heart catheterization to clarify what’s going on. You can have a heart attack even with minor blockage.”
Fazia was the speaker at a heart healthy breakfast sponsored by Novant Health Rowan Medical Center on Tuesday morning. Paige was one of nearly 90 people who attended the event at the Lee Street Theatre. Like many in the crowd, she’s already had heart problems.
The audience was split fairly evenly between male and female, and overall was an older group. Fazia noted that audiences such as this one tended to be well informed when it comes to heart health. The fact that so many people came out for a 7:30 a.m. event indicates a high level of interest, he added.
“It would be nice if younger people also attended,” he said, noting that it’s better to be proactive about your health rather than reactive once you start having problems.
Prevention was also stressed by Dari Caldwell, Novant’s president, in her welcome.
“We believe that the most important part of our name is the ‘Health’ part,” Caldwell said, and the hospital is moving toward preventive programs. “Our goal is to keep you out of the hospital, believe it or not.”
Systemwide, Novant has a goal of completing 500,000 ALC screenings in 2014, a test which measures blood pressure, blood sugar and body mass index. A number of folks lined up in the lobby afterward to take this free, 10-minute assessment.
In his remarks, Fazia noted 10 percent of a patient’s risk factors are based on family history and gender.
“After that, there are things we can work on,” he said. “The other 90 percent of risk factors he said, “can be influenced on how you live your life.”
Those include maintaining a healthy blood pressure of 140/80 or below, keeping cholesterol below 200, and, if applicable, managing diabetes and cutting out tobacco use.
Fazia pointed out that men who smoke are at three times higher risk of heart attack than non-smokers, with women at six times greater risk.
“There’s really no safe amount of smoking,” he quipped.
Yet if someone quits smoking, the risk of heart attack drops by 50 percent the first year, and after the second year is equal to that of a non-smoker.
With a nod to the breakfast of quiche, fruit cup and buttermilk drop biscuit, Fazia said other healthy lifestyle choices included eating a diet that’s low in fat and red meat, and high in fiber and servings of fruits and vegetables. He also recommended getting moderate, aerobic exercise for 30 minutes a day, five days a week.
You can break that 30 minutes up any way you like, he said, in both 15- and 10-minute increments. The benefit is the same.
Keeping your weight in check is also a factor in living a healthy life, because abdominal obesity or the “apple shape” contributes to heart disease. In other words, he said, the circumference of your abdomen should not be larger than the circumference of your waist.
Afterward, Fazia answered questions from the audience about stents — which are now done at the hospital — congestive heart failure, vein health, arrhythmia and the benefits of niacin and folic acid in heart health.
Lola Holt’s two brothers and father have had heart disease.
“I keep in close contact with my doctor for routine check-ups,” she said. “I just wanted more information.”
“I’m a health information junkie,” said Mary Knapp, Holt’s tablemate. Her father and grandfather both died from heart conditions, she said. “It’s in the back of your mind.”
Jaudon Cline’s husband, Wayne, suffered a massive heart attack in 2013.
“We came to support the hospital,” she said. “(Cardiologist) Dr. (Telly) Meadows saved his life. I just wanted both of us to get more information.”
Heart disease runs in Cline’s family. Her mother had two heart surgeries, and her brother had a heart transplant. She has high blood pressure and high cholesterol.
“I need to do more to improve my health,” she admitted. “I don’t exercise.”
But Cline, inspired by Fazia’s talk, said she was planning to start the Silver Sneakers exercise program.
For information about Novant Health Rowan Medical Center’s free screening programs, call 800-335-4921.
Freelance writer Susan Shinn lives in Salisbury.