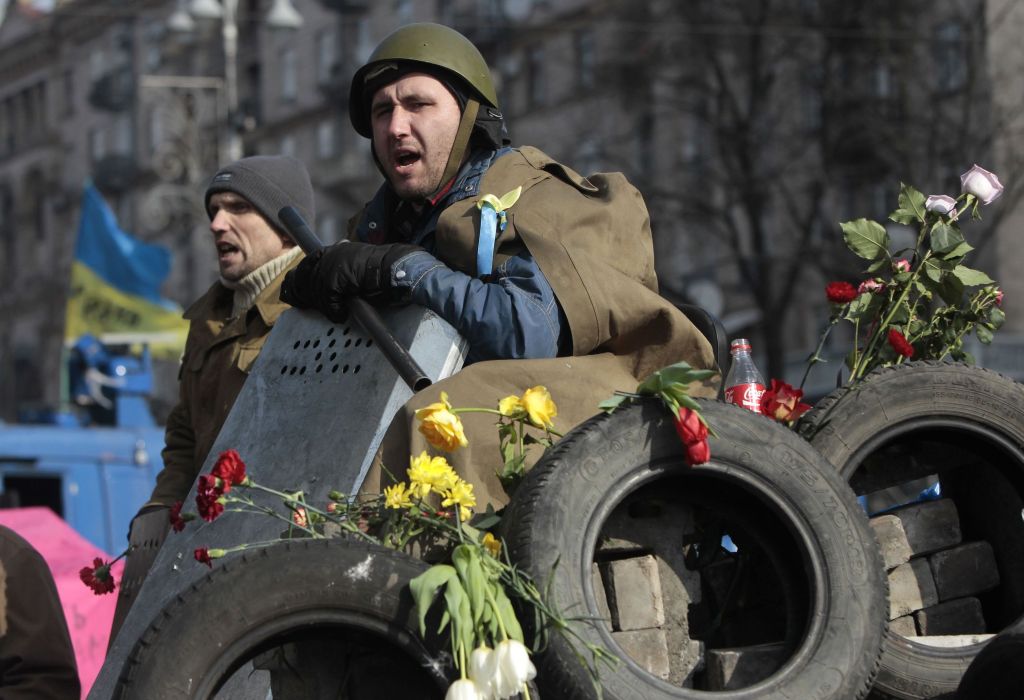 SEVASTOPOL, Ukraine (AP) — With Viktor Yanukovych on the run, Ukraine’s interim government drew up a warrant Monday for the fugitive president’s arrest in the killing of anti-government protesters last week, while Russia issued its strongest condemnation yet of the new leaders in Kiev, deriding them as “Kalashnikov-toting people in black masks.”
Parliament speaker Oleksandr Turchinov, the interim president, moved quickly to open a dialogue with the West, saying at a meeting with European Union foreign policy chief Catherine Ashton that the course toward closer integration with Europe and financial assistance from the EU were “key factors of stable and democratic development of Ukraine.”
In a statement released by his office, Turchinov said Ukraine and the EU should immediately revisit the closer ties that Yanukovych abandoned in November in favor of a $15 billion bailout loan from Russia that set off a wave of protests. Within weeks, the protests expanded to include outrage over corruption and human rights abuses, leading to calls for Yanukovych’s resignation.
Yanukovych, who fled Kiev on Saturday after the opposition took over government buildings, has reportedly gone to the Black Sea peninsula of Crimea, a pro-Russia area.
Calls are mounting in Ukraine to put Yanukovych on trial after a tumultuous presidency in which he amassed powers, enriched his allies and family, and cracked down on protesters. Anger boiled over last week after 82 people, primarily demonstrators, were killed in clashes with security forces in the bloodiest violence in Ukraine’s post-Soviet history.
Acting Interior Minister Arsen Avakhov said on his official Facebook page that a warrant has been issued for the arrest of Yanukovych and several other officials for the “mass killing of civilians.”
Yanukovych’s last public appearance was in a televised interview Saturday from Kharkiv in eastern Ukraine, a base of his support, where he insisted he was still president and would not leave the country.
He then tried to fly out of Donetsk but was stopped and went to Crimea on Sunday, Avakhov said.
There, Yanukovych freed his official security detail from its duties and drove to an unknown location, turning off all forms of communication, Avakhov said.
“Yanukovych has disappeared,” he added.
Security has been tightened across Ukraine’s borders, the Interfax news agency quoted the State Border Guard service as saying.
Activist Valeri Kazachenko said Yanukovych must be arrested and brought to trial.
“He must answer for all the crimes he has committed against Ukraine and its people,” he said, as thousands continued to flock to Independence Square to light candles, lay flowers where dozens were killed and watch a video screen showing photos of the dead. “Yanukovych must be tried by the court of the people right here in the square.”
Turchinov, the parliament speaker, is now nominally in charge of this strategic country of 46 million whose ailing economy faces the risk of default and whose loyalties are sharply torn between Europe and longtime ruler Russia. He said he hopes to form a new coalition government by today.
Russian Prime Minister Dmitry Medvedev strongly condemned the new authorities, saying they came to power as a result of an “armed mutiny” and their legitimacy is causing “big doubts.”
Medvedev wouldn’t say what action Russia might take to protect its interests.
“If you consider Kalashnikov-toting people in black masks who are roaming Kiev to be the government, then it will be hard for us to work with that government,” Medvedev said.
The Russian Foreign Ministry criticized the West for turning a blind eye to what Moscow described as the opposition reneging on an agreement signed Friday to form a unity government and aiming to “suppress dissent in various regions of Ukraine with dictatorial and, sometimes, even terrorist methods.”
Although Russia has questioned the new government’s legitimacy, European Commission spokesman Olivier Bailly referred to Turchinov as the “interim president.”
NATO’s supreme allied commander in Europe, Gen. Philip Breedlove, discussed Ukraine with Gen. Valery Gerasimov, chief of the general staff of Russia’s armed forces, and they agreed to keep each other informed about developments in the country.