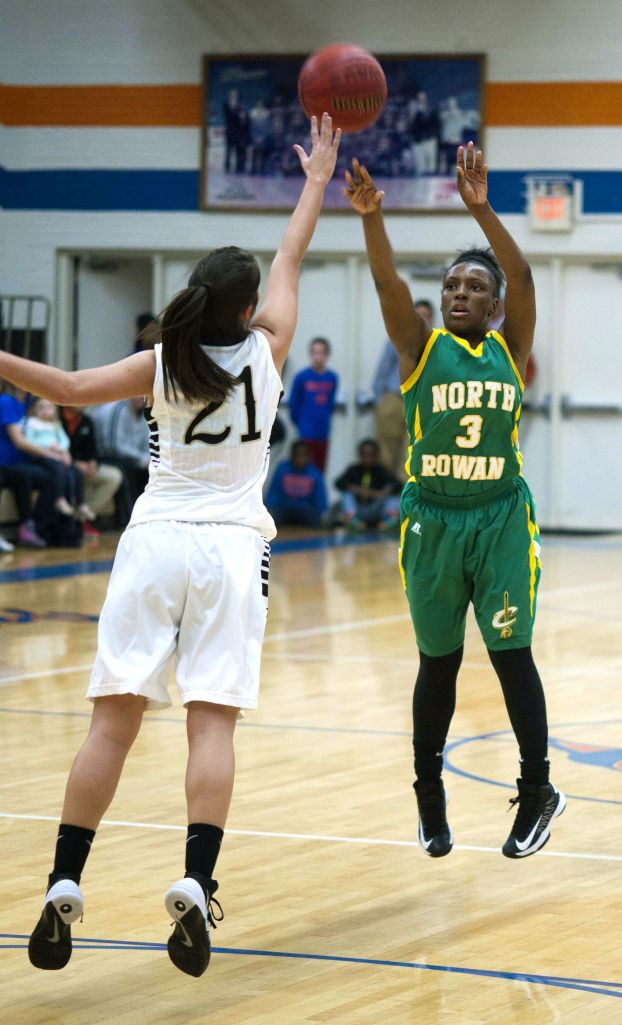 LEXINGTON — North Rowan’s girls have played this season almost with people feeling sorry for them.
No more sympathy cards are necessary.
North was an unstoppable freight train until Virginia Tech-bound Brielle Blaire was injured in Game 8. Since then, the Cavaliers have been listening to a lot of wow-if-only-Brielle-hadn’t-gotten-hurt-you-could’ve-been-really-good, but they proved something Friday in the Lexington gym.
Namely, that they’re still good. They hung a tournament-champions banner, the program’s first since 2003, to prove their point. They beat seventh-ranked East Davidson 45-43 in a tense struggle, and East Davidson hadn’t been on the losing end of a game since Dec. 27.
“We’ve had a great year,” North coach Brian Lytton said. “Brielle is a heck of a player and I know a lot of people wrote us off when she was hurt, but I never wrote us off. I still saw us as contenders. We won tonight against a legit top-10 team, and I believe we’re also a legit top-10 team.”
Second-seeded North (18-4) got 15 points from Nycieko Dixon, 12 from Demeria Robinson and 11 from Special Washington. Ashley Blaire did a lot of little things. Aliyah’s Farmer’s defense and rebounding were key, as the Cavaliers avenged two losses to ED, including a last-second one in Spencer.
Madi Hallman scored 17 for the top-seeded Golden Eagles (21-3).
“It was almost a replay of our game at home with them,” Lytton said. “Nycieko, our best 3-point shooter, had a shot to win that one and it went in-and-out. This time, their best 3-point shooter (Hallman) has a shot to win it, and it goes in-and-out.”
Hallman did have an open look to win it in the final seconds, but the Cavs were fortunate, and Jennifer Welborn’s follow wouldn’t fall either.
“When No. 11 (Hallman) shot the ball, my heart stopped working for a little bit,” Robinson said.
But mostly the Cavaliers’ hearts worked fine. Their offense was sporadic, but they did make seven 3-pointers. They defended for 32 minutes and they rebounded for 32 minutes.
Undersized but quick, North’s gameplan all season has been to press like crazy, force turnovers and shoot layups. Lytton adjusted this time — tenacious halfcourt defense that always had a girl denying East Davidson’s 6-foot-2 Bayley Plummer, who came in averaging 16 points, 14 rebounds and eight blocks.
“The first time we’ve changed the gameplan,” Lytton said with a smile. “You can’t press East Davidson — they’re guards are tood good. The girls listened and they carried the plan out.”
North trailed 12-3 early but didn’t panic, and Washington hit a 3-pointer to stop the bleeding.
Dixon didn’t play in the first quarter, but she came in firing in the second. She hit a 3-pointer to pull North within 16-13. Farmer skied for a rebound, then scored on the other end to give the Cavaliers, who got about 15 defensive stops in a row, a 19-18 halftime lead.
‘It was just time for us to beat them,” Dixon said. “East Davidson is a great team, but we were on our toes on defense and everyone stepped up tonight at just the right time.”
A late Dixon 3-pointer shattered a 35-all tie. Washington got a stickback for a 42-41 lead.
At the end, it was mostly Robinson. Her driving bucket over Plummer’s oustretched arm with 20 seconds left gave North a 44-43 lead.
“She’s really good at blocking shots,” Robinson said. “I got it over her. I don’t know how.”
With 11 seconds left, Robinson made a steal, and with nine seconds left she hit a free throw. Then the Cavaliers held their breath — and held on for a championship.
“It was a big fight tonight,” Farmer said. “All the way, it was a fight. But everybody crashed the boards, and we were a team from beginning to end.”