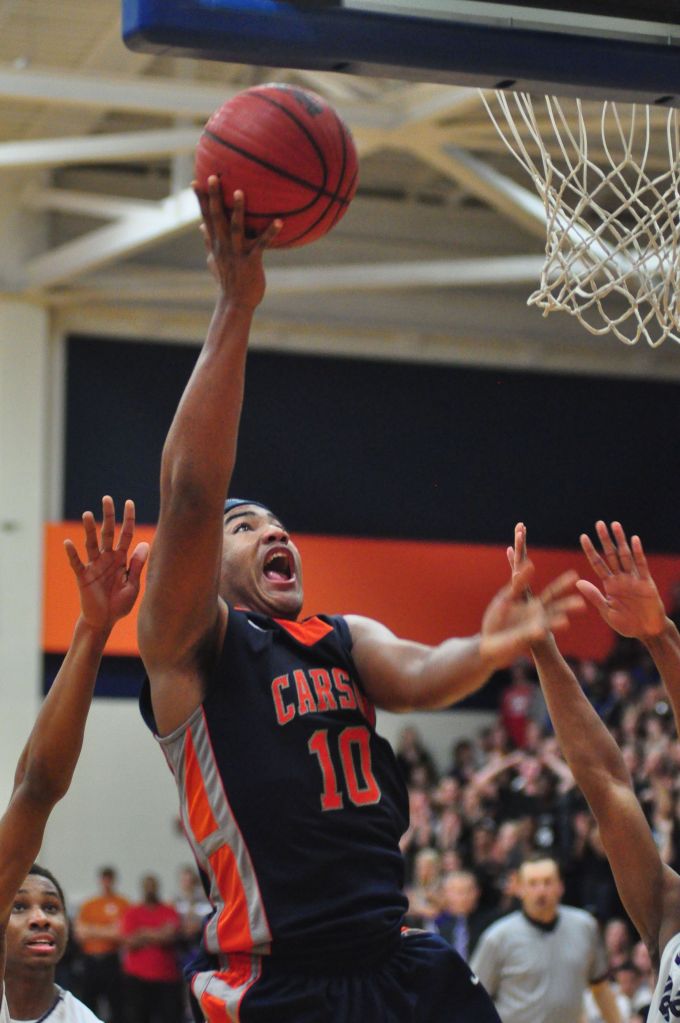 CHINA GROVE — Cox Mill didn’t need to beat the buzzer Friday night.
After topping Carson twice this season on last-second shots, the Chargers didn’t have to wait until the final horn in the Southern Piedmont Conference championship game to win.
Instead, Cox Mill iced the game with 10 seconds to spare on a Jonathan Earl and-1 to capture its second straight tournament crown.
“A gutty win,” an ecstatic Charger coach Jody Barbee said afterward. “Beating a team three times is absolutely hard; just beating them twice was hard. But my kids did a good job.”
“It was a battle — we knew it would be,” Brian Perry, Carson head coach, added. “Every night in this league is a battle and we didn’t expect any different.”
Playing in front of an electric, standing-room only crowd in China Grove — complete with competing student sections — the Chargers charged out of the gates, scoring 10 of the first 11 points to take control early.
Carson eventually settled in, cutting the deficit down to 10-8 before heading to the second down just five.
Cox Mill quickly pushed it back out to eight at 20-12 in the second and threatened to run away again, but the Cougars had an answer.
Led by senior Tre Williams, Carson stayed within striking distance, trimming the deficit down to two on a pair of free throws.
Darren Isom highlighted the run with a thunderous one-hand slam over a defender on the fastbreak as Cox Mill led by just one (30-29) at the intermission.
Colton Laws gave Carson its first lead of the night with a huge three-point play early in the third, pushing it out to as much as five at 41-36 in the frame.
Matt Morgan, who beat the Cougars Monday on a buzzer-beater, beat the third-quarter buzzer Friday to give the Chargers a 43-41 lead and momentum heading into the fourth.
The junior, who also surpassed the 1,000-point milestone in the game, opened the fourth with another trey to give Cox Mill a lead it would never surrender.
“Matt Morgan was clutch again for us,” Barbee said. “He knows how to score it.”
Carson made it interesting, battling the Chargers down to the wire once again.
Marquez McCain connected on a tough layup in the paint before Laws put one back up to cut it to 63-61. After a pair of Morgan free throws, Williams knifed through the lane and hit the layup plus the foul to bring the Cougars within one at 65-64.
Earl then got behind the Carson full-court press and converted the three-point play with 10 ticks to go to seal the championship.
“I commend him for not only taking the contact and finishing at the rim, but to go to the line and make the free throw,” Barbee added. “That was huge.”
The Cougars got a few shots off in the final seconds but fell as the Chargers celebrated at midcourt.
“We kept grinding,” Perry said. “We never quit even though a couple things went against us. There are some guys in the locker room that are hurt, which just shows you how much they care. I don’t like seeing them hurting, but I like to see them care.”
Carson will enter the upcoming state playoffs as the No. 3 seed from the deep SPC. Cox Mill secured the second seed with the win.
“I think our league has prepared us as good as any league in North Carolina to enter the state playoffs,” Perry added. “Night in and night out, we played great teams. Our guys have to understand that whoever we draw, we’re going to be prepared to go play.
“We’re going to bounce back — we’ve bounced back all year. We’ll be ready for next week.”