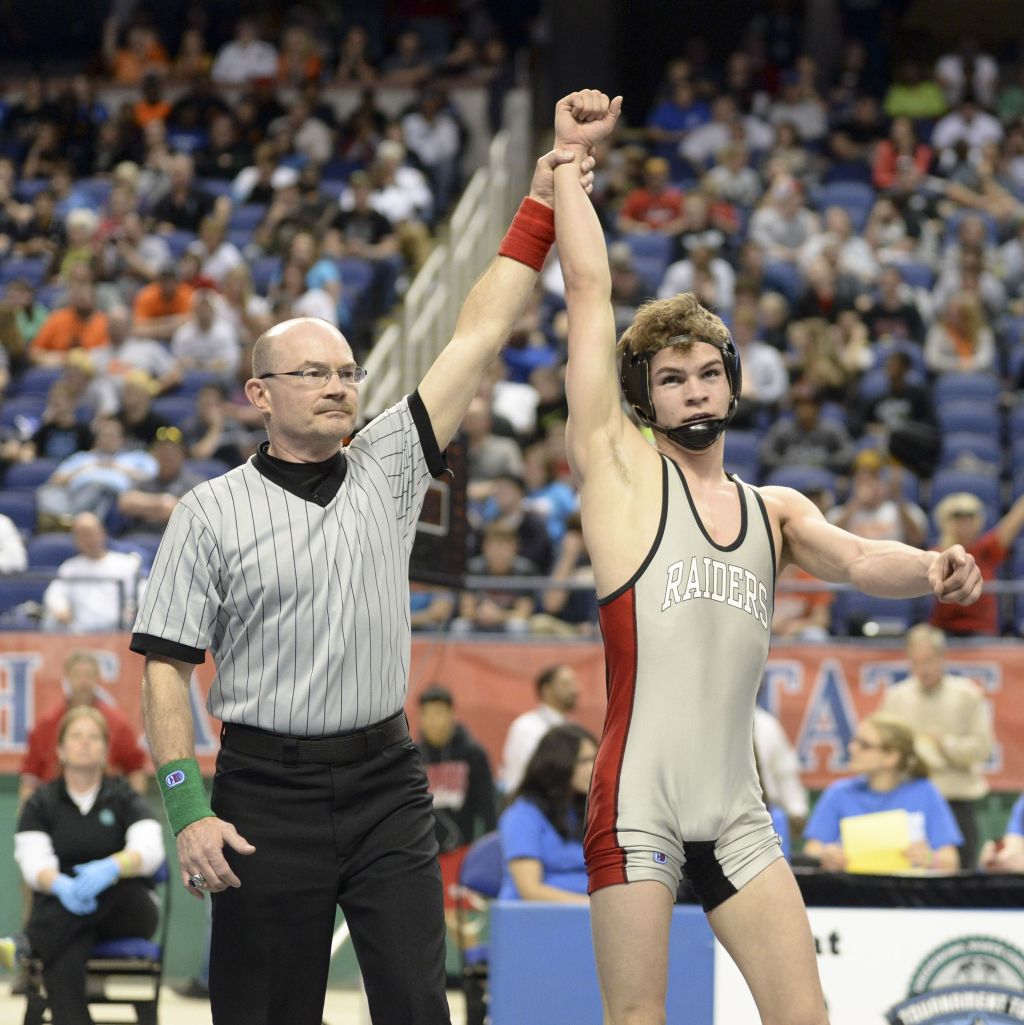 GREENSBORO — For three seasons Logan Durham has provided thrills and spills for South Rowan wrestling fans. On Saturday night he provided a state title.
The 106-pound junior crowned his perfect season at Greensboro Coliseum, where he outscored Weddington’s Parker Walton 3-0 in the final round and won his first state championship.
“It may be once-in-a-lifetime,” Durham said, sporting a smile that could light up Times Square. “But I’m hoping to make it twice-in-a-lifetime. I killed myself to keep making weight, so this is all worth it.”
Durham, South’s first state titlist since 1990, limited himself to a diet of boiled eggs and grilled chicken throughout this season. His reward was a 31-0 record and a spot atop the awards stand. “I gotta thank God,” he exhaled amid the post-match excitement. “Without that I’m nothing.”
It marked Durham’s second victory over Walton (51-2) this week. He gained a 6-0 decision in Monday’s Midwest Region final.
“It could have gone either way,” he said. “I watched film on him and watched film on me.”
Durham used a first-period takedown to go ahead 2-0 and added his final point midway through the second. The only moment of concern came as the second period expired, with Durham on his side but still in control. “I was just trying to hold on,” he said. “Every point is big in this tournament. I just did what my coaches and my dad told me to do — push forward for six minutes and don’t make any mistakes.”
South coach Wayne Freeman felt it was a sound strategy. “He came here to dominate,” he said. “That first takedown was huge. It would have been huge for the other kid as well. We just felt like, ‘Don’t let a quick shot take you down.’ In the finals it’s very important to be very consistent, which he was.”
Next on the menu for Durham? “Something good I’m sure,” he said. “I had to sit out at Christmas (the county tournament) because I didn’t make weight. And Thanksgiving I could barely eat. And my family — they love to eat. My dad is a great chef.”
It was his mom who got the first post-championship hug when Durham scaled a wall near the mat and greeted her with another thrill.
•

East Rowan’s Wyatt Blume (152) and Shiheem Saunders (170) each suffered convincing final-round losses. Blume had been “on fire this week,” according to East coach Barry Justus, but the Mustangs junior was slowly exstinguished in the 3A 152-pound final.
“I should have tried to get the first takedown quicker,” he said after dropping an 8-4 decision to Southern Guilford’s Drake Patrum. “I should not have tried to ride him so much. I should have gone for the points on top.”
Blume (45-8) opened a 2-0 first period lead but fell behind midway through the bout when Patrum (31-2) — who also beat Blume in January — put him in a sitting position. At the end of the second period Blume, now a two-time state placewinner, needed some injury time to treat a tight shoulder.
“Between the regionals on Monday and the past three days here, Wyatt has been wrestling the best he’s ever wrestled,” Justus said. “Last night he beat a kid who was 55-1. Wyatt took him down. But today he made two mistakes and it cost him.”
Second in the state is nothing to sneeze at. “I finished pretty strong,” Blume said, forcing a post-match smile. “First place would have been better. This was disappointing.”
Saunders was outmatched 7-2 by unbeaten David Peters-Logue of Orange County. He fell behind 4-2 in the first period and felt his right shoulder stiffin midway through the second. “My plan was to get the first takedown,” Saunders (45-5) said after completing his first state tournament. “But he got a sinle leg on me and put me down. That first takedown is a big momentum changer.”
Justus praised Saunders, who soldiered on and came within a move or two catching Peters-Logue (41-0) — an Appalachian signee who was fifth in the Super 32 this year. “Shiheem was going for it,” Justus said. “He stacked him on top of his head and was within an inch or two of turning into a tie match.”
Carson junior Alex Lyles suffered the most hard-to-digest loss of his career when he fell 3-2 to Topsail’s Joseph Sculthorpe in the sluggish, 285 championship bout. He fell behind 2-0 in the first period and trailed by three before escaping twice in the final moments.
“I should have been the one scoring off the mat,” said Lyles, a 2013 state champ at 220 pounds. “I should have been quicker.”
Lyles wrapped up the season 31-3, but minus the title he coveted. “He didn’t create enough motion on his feet,” said Carson coach Bryce Vandenberg. “He got Alex’s head down pretty good in the first period. We would have loved an early takedown, but never got one. We never got our tempo going.”
In the 4A finals, Davie County senior Alex Gobble (182) was smoked 14-2 by South View’s Malik McDonald. Gobble entered with a 48-1 record but offered little resistance. “He never could get anything going,” DC coach Buddy Lowery said after Gobble made a hasty exit. “Especially from the the bottom. It just seemed like we were there most of the time.”
•

Carson’s Brandon Sloop reached the 3A podium after placing third at 160. The junior beat Trevor Cook of Fred T. Foard 7-2 and then outpointed Havelock’s John Ellis, 3-2, in the consolation final. Sloop finished the season 45-6.
A.L. Brown sophomore Nicholas Sexton (126) also claimed a third-place ribbon in the 4A competition. He edged Northwest Guilford’s Austin Comeford and closed the year with a 38-7 record.
South’s Tyler Hall finished with a 29-5 mark after earning fifth place in the 3A 126-pound bracket. The senior stopped Justin Payne (Clyde A. Ervin) 8-3 in wrestlebacks and capped his varsity career with a 4-2 decision over Piedmont’s Brett Underwood.
Jeffrey Burton (182) of Salisbury made quick work of North Brunswick’s Evin Bellamy in the 2A consolations, winning by fall in 43 seconds to claim fifth place medal. Burton, who finished 38-10, was pinned by Bellamy in 3:08 two rounds earlier.