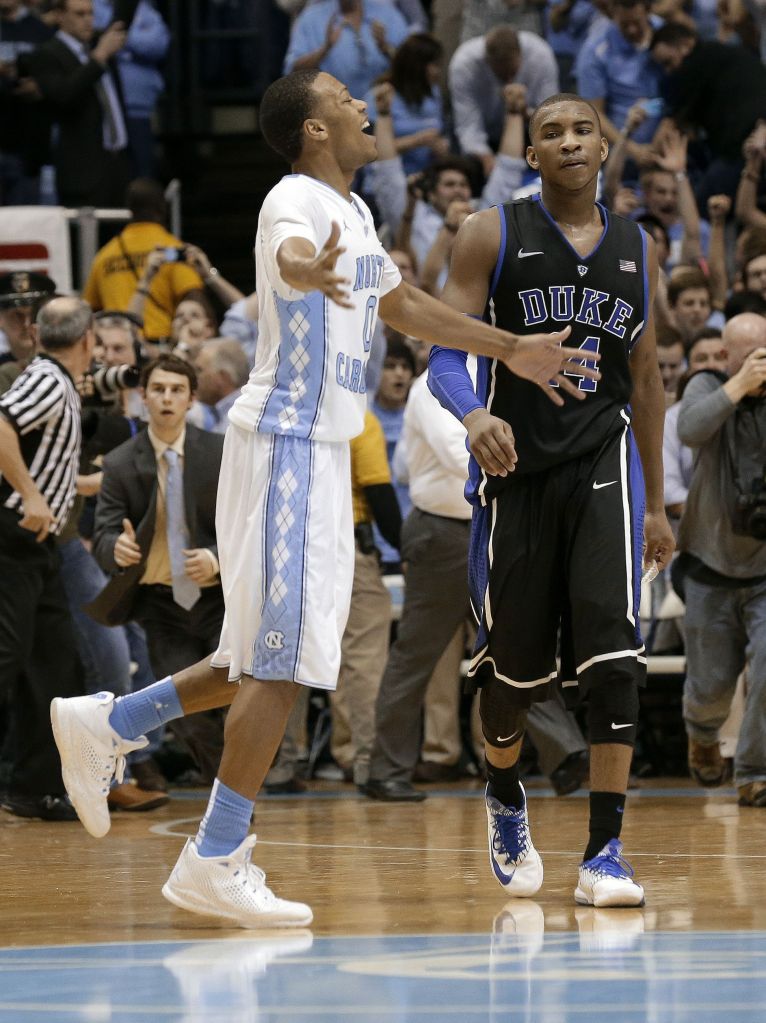 CHAPEL HILL — Marcus Paige turned in yet another big second-half performance for North Carolina. This time it was good enough to help the Tar Heels beat No. 5 Duke in the rivalry’s weather-delayed game.
Paige scored all 13 of his points in the second half, including two big baskets in the final 21/2 minutes, to help the Tar Heels beat the Blue Devils 74-66 on Thursday night for their eighth straight win.
Senior Leslie McDonald added a season-high 21 points for the Tar Heels (19-7, 9-4 Atlantic Coast Conference), who rallied from 11 points down in the second half to snap a two-game home losing streak to the Blue Devils (21-6, 10-4).
It was by far North Carolina’s most impressive win during the run that has helped the Tar Heels dig out from an 0-3 ACC start. Before Thursday, most of the wins had come against teams standing at sixth or lower in the league standings.
When it was over, UNC students and fans stormed to midcourt to celebrate a win that came eight days later than they had hoped due to a winter storm that forced the game’s postponement last week. That storm brought enough snow and ice to paralyze area roads and keep Duke’s bus from even making it to Durham to pick up the team for the 11-mile drive to the Smith Center in Chapel Hill.
In the end, the Tar Heels responded with a tough-minded but not always pretty performance that was good enough to wrestle control away from the Blue Devils.
The Tar Heels shot 47 percent from the field and even made their last 10 free throws in the final 6 minutes after a disastrous start at the line, providing a rousing finish befitting the long-running rivalry.
Jabari Parker and Quinn Cook both scored 17 points for Duke, which led 51-40 with about 15 minutes left before going ice cold from the field. The Blue Devils missed 13 straight shots and went scoreless for 6 minutes at one point, helping the Tar Heels climb back into the game.
Duke shot 36 percent (11 for 31) after halftime and finished 5 for 22 from 3-point range for the game.
After being hounded throughout the first half by Duke defenders Cook and Rasheed Sulaimon, Paige — who has made a habit out of big second-half performances this season — finally scored about 31/2 minutes into the second half.
But he got stronger down the stretch.
McDonald hit the go-ahead jumper to make it 62-60 with 3:54 left, capping his own strong performance after recent struggles. Paige followed with a stepback jumper over Rodney Hood with 2:11 left, then answered two free throws from Parker by driving by Hood for a scooping layup through the heart of Duke’s defense to keep it a two-possession game.
After Sulaimon missed a 3 on the ensuing possession, freshman Nate Britt followed with two free throws that pushed the lead to 68-62 with 46.2 seconds left and soon had the rowdy home crowd inching closer to the court to celebrate at the horn.
The postponement created a four-games-in-eight-days stretch for both teams, though it’s particularly challenging for Duke with No. 1 Syracuse visiting Cameron Indoor Stadium on Saturday night in a rematch of the overtime classic won by the Orange earlier this month.