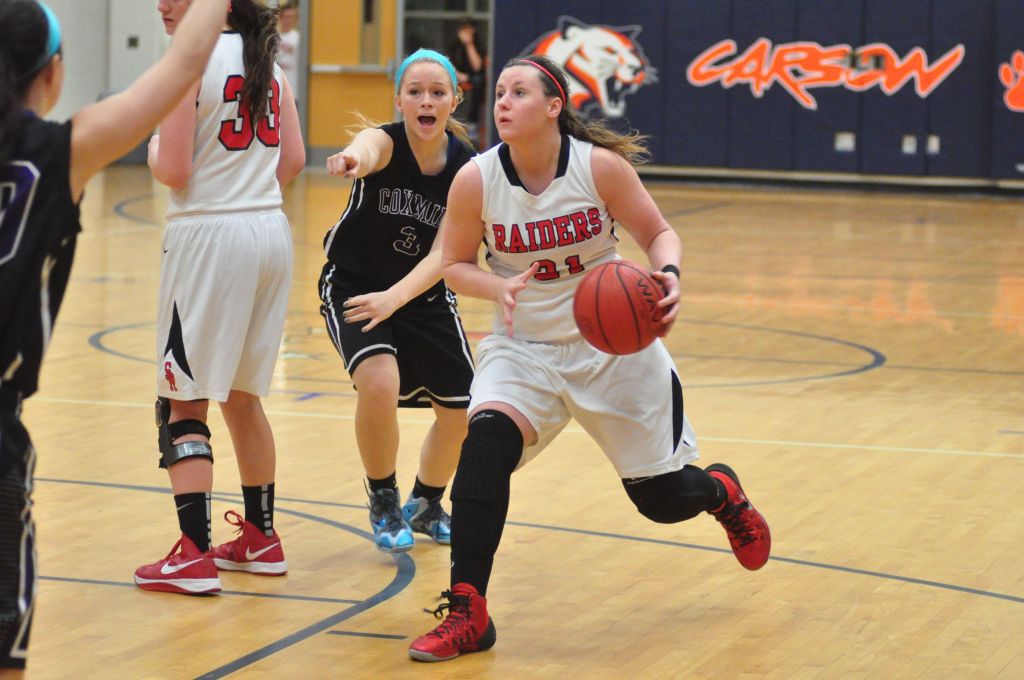 CHINA GROVE — Cox Mill’s girls put up 17 field-goal attempts in the first half.
Just one shot went in, and Kourtney Elmore, the girl who made it, sat down with three personal fouls after five minutes.
Wednesday’s semifinal was an offensive nightmare for Cox Mill’s girls, and South Rowan’s defense caused most of the trouble. Second-seeded South created turnovers and forced tough shots and won easily 46-34 over the sixth-seeded Chargers, who were playing to extend their season and had knocked off third-seeded Hickory Ridge 24 hours earlier.
“That’s a team that scored 73 points Tuesday, a pretty talented team,” South coach Jarrod Smith said. “But we played the best team game we’ve played in a long time. We had a stretch where we won games without playing well. Today, our defense was exceptional.”
South (16-8) isn’t often held below 50 points, mostly because fill-it-up juniors Avery Locklear and Cassidy Chipman average 38 between them.
Cox Mill (8-18) put the brakes on Locklear, holding her to eight and ending her string of double-figure games at 16. It was only the fifth time in 67 career games that Locklear hasn’t scored at least 10.
But Chipman got 17, and on a day when it was hard for either team to score, 17 was a ton. Chipman’s back-to-back 3-pointers in the third quarter were gamebreakers.
“We used four different defenses and tried to change things up a lot on South,” Cox Mill coach Kate Jenis explained. “Defense wasn’t our problem. Our problem was we couldn’t score. We were just so cold.”
Lynsey Corriher got South started in the first quarter by crashing the boards.
Cox Mill made enough free throws to stay in the game, but when Locklear scored as she was fouled to cap a South flurry on the offensive glass to close the half, the Raiders took a 25-13 lead to the break.
“I thought we played a little scared, and I really don’t know why,” Jenis said. “We’d played South twice. We knew who could hurt us.”
Chipman was hurting, limping noticeably, but just when you thought Smith might have to take her out, she started hurting Cox Mill. The Chargers went to a 2-3 zone, and Chipman immediately swished her back-to-back 3s from straightaway.
“Cassidy found her spots and her teammates did a good job to find her,” Smith said.
But mostly it was defense for South — furious, hair-on-fire defense. There was a deflection on a high percentage of Cox Mill’s trips downcourt and Raiders were all over the hardwood.
“That’s what we work on — our defense a lot more than our offense,” Chipman said.
South’s tiny guard Sylvetta Bost seemed to be in three places at once. Carolina Hubbard provided a spark, and Beth Ann Martin jumped off the bench to do her defensive thing. Kayla McClendon stood her ground and drew a charge when Cox Mill’s high-scoring guard Taylor Sehm-Crowley tried to get to the rim, and after that, the Chargers mostly settled for long-range attempts.
“We did a good job of putting pressure on their guards,” Bost said. “Pressure, pressure, pressure.”
Hubbard, who has returned after missing two months with a broken collarbone, is an important part of Smith’s puzzle.
“It’s slowly coming along,” she said. “I’m very happy with how the team played today. We eliminated their shooters and we out-rebounded them. They only got one shot.”
South’s lead was only 10 with 1:40 remaining, but Jenis knew there would be no rally.
“I know my team,” she said. “And there was no energy today to come back.”
Marissa Montgomery hit two late 3s for the Chargers to keep them from being held below 30.
South’s 16th victory marked the most for the program since 1999, and it had Smith smiling.
“We’ve got good players and having good players is always nice,” he said. “But having good players who have learned to play together — that feels great.”
It will be South vs. top-seeded East Rowan (21-3) for the SPC tournament title on Friday at 6 at Carson. They split their regular-season meetings. East won 61-51 on Monday at East. South won 61-44 at home.