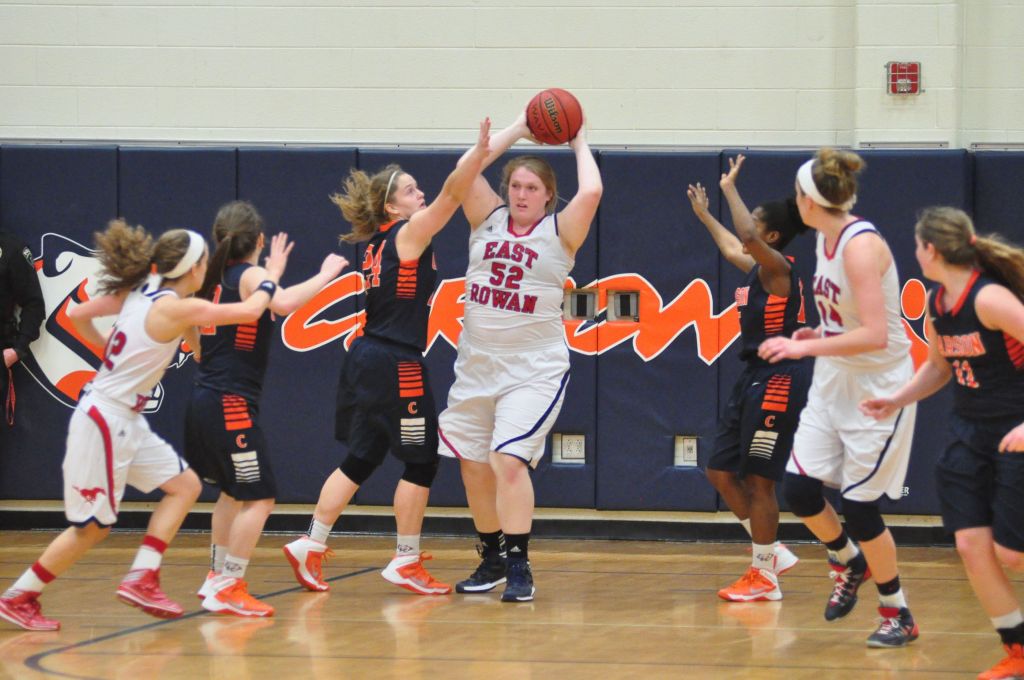 CHINA GROVE — Cue round three.
After watching bitter rival South Rowan clinch its spot in the finals moments before taking the floor Wednesday night, the Mustangs had a little extra fuel heading into their semifinal match-up with Carson.
The Cougars did all they could to spoil the party, but East Rowan overpowered a smaller lineup to pull out the 56-49 victory to punch its ticket.
“I feel like I can say 100 percent without a shadow of a doubt, we left everything out on that floor,” Carson skipper Brooke Misenheimer said. “We played hard and that’s all I can ask.”
“It was a tough one,” East coach Danielle Porter added. “They know all of our tricks and were fighting for their lives.”
“We have a few things to clean up, but we’ll be ready for South Rowan.”
Before playing for the title Friday, the Mustangs had to deal with a Carson club that came ready to play behind its home crowd.
Alex Allen drilled an early trey before stealing an errant pass to set up Sydney Huffman down low for an easy bucket as the Cougars grabbed a quick 5-2 lead.
Kelli Fisher, who was a force all night, scored six points in the frame to complement a Shennel Pharr 3-pointer as East pulled ahead 14-10 at the end of one.
But Carson wouldn’t go away, using an 8-2 spurt midway through the second to cut it to 20-18 and stay within striking distance.
Richmond signee Karleigh Wike responded with a putback and two blocks to give the Mustangs an eight-point halftime advantage.
After a half of just hanging around, East finally began to assert themselves to open the third.
Amani Ajayi scored six points to spearhead a 10-2 charge to give the champs their largest lead of the night at 36-23 as they threatened to runaway with the game.
But Carson had other ideas.
Playing like a team with nothing to lose, the Cougars reeled off a dozen in a row — scored by six different players — to fight all the way back to 36-34.
Needing an answer, Fisher stepped up and literally put her team on her back.
The 6-foot-3 center powered her away around and through people in a personal 10-2 run, including eight straight, to extend the lead back to double digits, 46-36.
“Kelli Fisher is so fundamental,” Porter said. “She had a really strong run there to create some separation for us.
“Everybody likes to talk about our size, but to be a 21-3 team, you have to have all cylinders clicking,” she continued. “We also have players who can drive gaps and score and run the offense — we have all the cogs in the machine, it’s just a matter of making sure everybody shows up at the same time.”
“I do what I can,” a humble Fisher, who finished with a game-high 20 points and 17 rebounds, said afterwards. “Our guards were doing a good job of getting it down the court. I was trying to get position for the weak-side rebound.
“We have unfinished business with South,” she added, looking forward.
Fisher and the Mustangs will get another shot at South after holding off another last-second push by Carson to advance to the championship game.
“This is how it should be,” Porter said. “There were some upsets early, but this is what we envisioned. We want to bring it home.”
“We’re ready for a championship,” Fisher added. “We just have to be ready mentally and physically.
“It’s going to be a dogfight.”