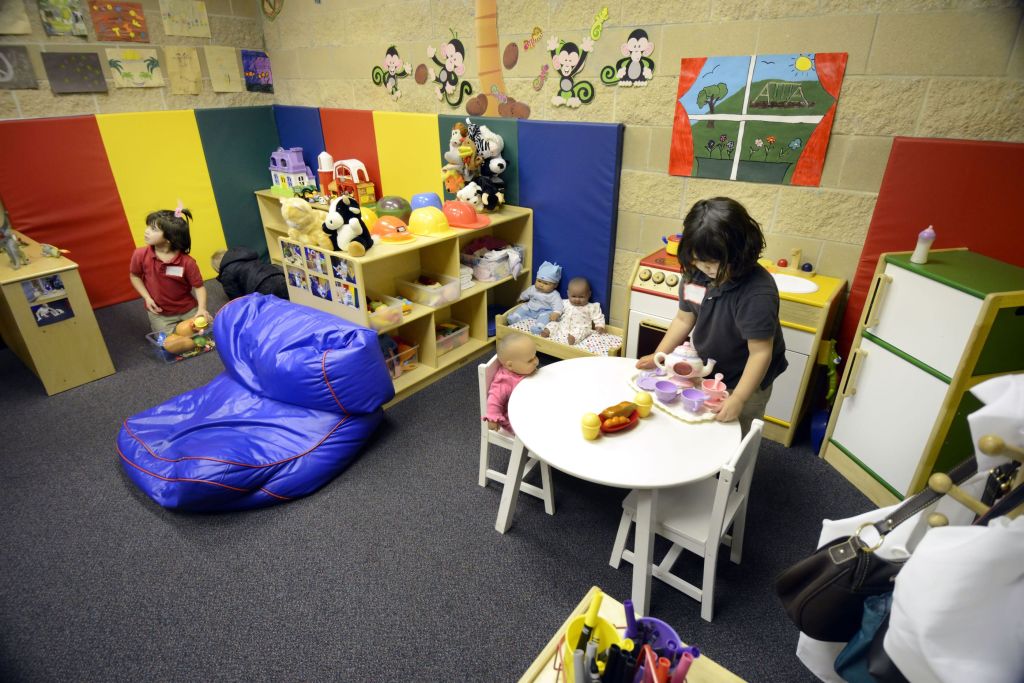 SALISBURY — It’s not something a lot of people know, but the Rowan County Courthouse has a Child Care Center.
Families First N.C. Inc., a United Way-funded agency in Rowan County, has provided the Child Care Center for a dozen years in a room down the hall from the first-floor concession stand.
Thanks to some extra funds, Families First has updated the center, and Tuesday evening attorneys, judges and courthouse personnel in general were among a good crowd of other invited guests to stop in and see the changes.
Kaylee Avila, 6, and her sister Abby, 4, who are familiar with the child care center from past courthouse visits, served as tour guides.
Jeannie Sherrill, executive director for Families First, noted that the rocking chair with a hole in the seat is gone.
So is an old crib that didn’t meet evacuation standards. The new crib has wheels, and if a courthouse evacuation were necessary, up to 130 pounds of infants could be loaded into the crib and wheeled out.
Before the update, games were missing pieces, and Sherrill remembers picking up a doll whose head was attached to the rest of its body by a pin.
A large, round table used to take up much of the center of the room.
Now that monstrosity is gone, and the room is divided into fresh new centers, with books and toys. The play kitchen in the corner affords more room. There’s a better art center with new easels and all the supplies encased in one cabinet.
“It opened it up immensely,” lead teacher Beth Hamilton said of the redesign, “but it would be nice to have two rooms.”
As nice as the updated Child Care Center is, the need for more space, especially to separate young infants from older children, is obvious.
Kids who come to the center range in age from 6 weeks to 10 years old.
The room the center has now is about the size of a large bedroom. (There’s a bathroom, with a changing table, too.)
Attorneys, judges and Families First board members also wish the Child Care Center could be available all day. Right now, it operates from 8:30 a.m.- 1 p.m. Monday-Thursday.
ggg
The Child Care Center is available to adults who need a place for their children to stay while they have business in court.
The parents or grandparents sign in the children, who receive an arm band, and the adults later receive a green piece of paper signed by court personnel when it’s time to check out.
Children sometime play at the center before having to go into a courtroom to testify themselves.
Mondays are the days domestic violence cases often are heard and, sadly, that’s when the Child Care Center is busiest.
Summers in general also are the Child Care Center’s busiest season because school is out.
Hamilton and Jean Webb have been the regular teachers at the center, and they receive help regularly from two student interns, one from Catawba College and the other from Livingstone College.
Title 5 funding is running out for Webb’s position, and her last day is scheduled for March 4.
With two teachers, the center can have a maximum of 10 children; with one, only five.
“It’s very challenging,” Hamilton says. “… We make the best with what we have.”
Children are served on a first-come, first-served basis, with no advance notice or appointments necessary.
When her room is filled to the maximum allowed, Hamilton creates a waiting list, and she’ll go hunting the halls of the courthouse for parents when a spot opens up.
Judges do not want children in their courtrooms unless they have to testify. It makes for more effective proceedings.
But the children also benefit from having a place to go at the courthouse. They shouldn’t be subjected to some of the family matters discussed in court, if they don’t have to be, Sherrill says.

ggg
Joyce Goodwin, a Families First board member, said it will take some shaking of bushes, but the need is pressing for the Child Care Center here to be an 8 a.m.-5 p.m. Monday-Thursday enterprise.
Meanwhile, Sherrill also will be looking to restore Title 5 monies.
The Child Care Center’s operation is made possible each year by contributions from the Woodson, Proctor and Robertson foundations; the United Way and the N.C. Bar Foundation Endowment.
Funds for the recent update came from the Governor’s Crime Commission, which also funds Families First’s highly successful Visitation Station.
The “station” provides for safe exchanges of children between estranged parents and a supervised place for parental visits, as often ordered by the court.
Marcie Petty says a high number of the children showing up at the courthouse’s Child Care Center also are part of families using the Visitation Station on weekends.
The fresh look of the courthouse’s Child Care Center can’t hide certain things.
It needs more room, expanded hours, another teacher, more county financial support and what Sherrill is calling “Huggers and Rockers.”
She’s hoping retirees and other folks with free time will volunteer to sit and play with the young children at the courthouse.
The kids shouldn’t have to be there. But if they are, why not make it a friendly experience.