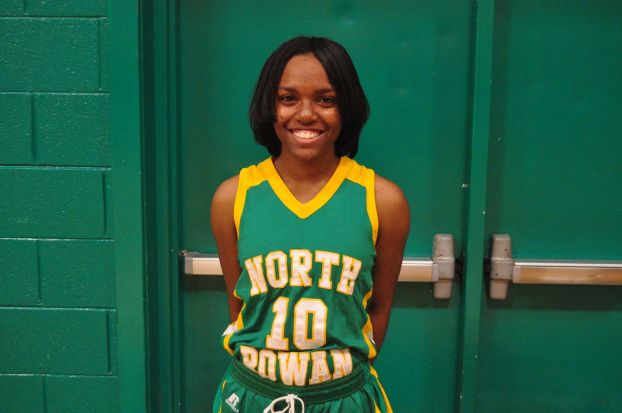 SALISBURY — North Rowan set the pace and the tone of the game really early Monday night against Salisbury.
The Cavaliers poured in 42 points, went to the free throw line 29 times and tallied 16 steals — and that was all in the first half — en route to a comfortable 76-32 triumph.
“I thought it was important for us to make a run early and get into our up-tempo game early to force some turnovers,” North head coach Brian Lytton said. “We didn’t want to let them hang around because we have a lot of respect for this team.
“We wanted to jump on them early, and we did a good job of that.”
The Cavaliers scored the first six and jumped out to a 15-2 lead on the road behind a suffocating full-court press.
North forced 14 turnovers in the first stanza with 12 steals as the Hornets struggled to find their rhythm early.
“We have some very quick girls,” Lytton explained. “They are good at anticipating and reading.
“They are also really good at getting back,” he continued. “So even if you beat our press, it’s hard to get a layup. And that’s really the key to it.”
After a Cavalier technical foul, Salisbury scored eight of final nine points to trim the deficit to 16-9 at the end of one.
Nycieko Dixon snatched momentum back in a hurry by sinking three free throws 20 seconds in to push the lead back to double digits.
Dixon and Demeria Robinson combined to outscore the Hornets in the first half 28-18 with 10 steals as North took a 42-18 lead into the locker room.
“We were just trying to defend the ball,” Robinson said. “We just wanted to apply pressure.”
The Cavs kept up the pressure in the second half, rolling to the win.
North turns its attention to the CCC tournament with a potential rematch with regular-season champ East Davidson looming.
“We just have to play our game,” Lytton said.
Robinson was a little more confident.
“All we have to focus on now is beating East Davidson,” she said. “We’re looking forward to winning that one.”