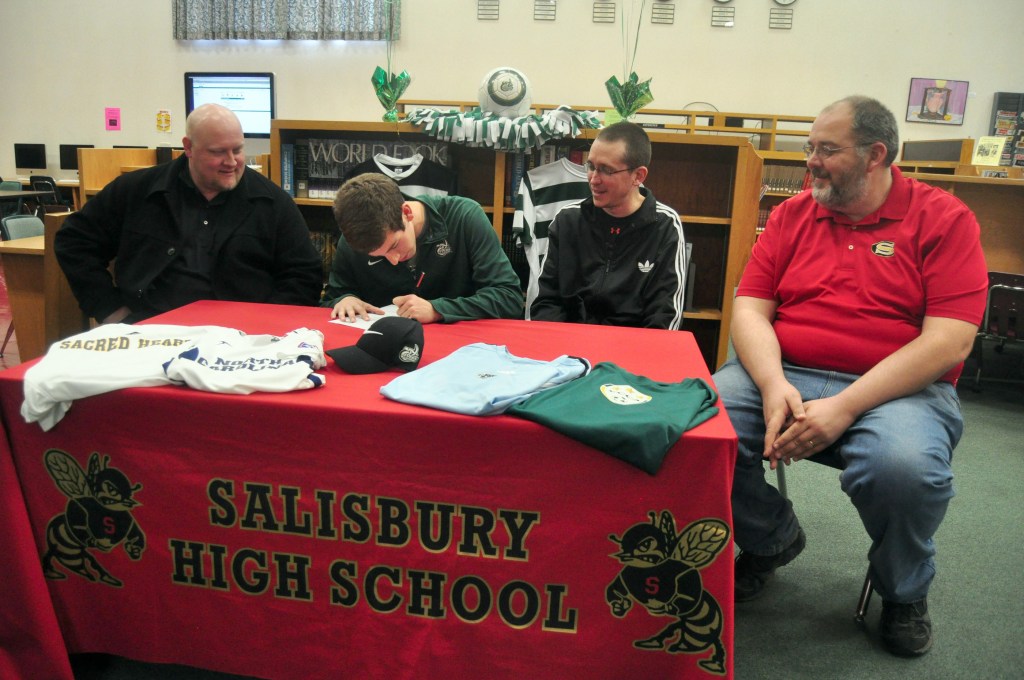 SALISBURY — Banks Fisher has made tough choices during his soccer career, but this was an easy one.
Fisher will play in college at UNC Charlotte, A national contender most years and right down the interstate from his hometown, the 49ers boast some of Fisher’s former club coaches and a chance to continue the success of recent Salisbury goalies.
The last two years Fisher traded in a Salisbury High jersey and watched with conflicting emotions as younger brother Max helped the Hornets to their second state championship in three years.
Fisher played for Salisbury High his freshman and sophomore seasons before joining The N.C Fusion Academy team based in Greensboro to get exposed to premier talent and play the best in the region. Where the Academy differs from AAU basketball or travel baseball is that players have to forego playing for their school if they wish to continue playing in the Academy.
“If you took the best players from the best teams of every single high school team in the state, that’s the level you play at every day,” Fisher said. “It’s still a tough decision to make.”
So while Fisher never actually played at SHS for the last two seasons, he still celebrated as a member of the team last November when the Hornets beat Kitty Hawk First Flight 2-1 to win the state 2A crown. All of the SHS team was on hand for Fisher’s signing including coach Matt Parrish, a mentor to Fisher off the field.
“For a portion of this year I was torn,” Fisher said. “I wanted them to win more than anything in the world. As long as they won, that was okay whether I was a part of it or not. Luckily, coach Parrish supported what I wanted to do.”
In 2011, he backed up Connor Miller and played sparingly in the field when SHS won its first state title. This year, Fisher was still a part of the team, encouraging his friends from the sideline.
Fisher signed his letter of intent at SHS last week. Parrish, who says Banks reminds him of himself at 17, was glad that Fisher signed to play Division I soccer in addition to adding another state title ring.
“I’m super happy and relieved that everything worked out like it did,” Parrish said. “Banks reminds me of me when I was his age.”
He discovered the goalie position at age 10 on the soccer fields off Hurley School Road.
“One day our goalkeeper could no longer play and the team said ‘Banks, you’re good with your hands, you play basketball, get in there,’” Fisher said.
Fisher went on to play it at Sacred Heart and was pretty good. He gave up basketball and stuck with club soccer with F.C. Carolina Alliance out of Concord.
Fisher, 6-foot-3, 180 pounds, played on a club team for Charlotte head coach Kevin Langan and assistant coaches Jason Osborne and Kyle Gookins as an underclassman.
He’ll be joining a stout program as the 49ers won Conference USA last season, compiling a 12-6-3 record. Charlotte reached the national championship in 2011, falling to UNC.
Fisher is the latest in a decade-long run of worthy goalkeeping from Salisbury. Miller (Old Dominion), Frankie Cardelle (Catawba) and Daniel Guertin (Emory) all played in college.
“Frankie and Connor were extremely helpful in my development,” Fisher said. “I’ve played with Frankie since I was 10.”
Fisher, a likely business major, carries a GPA north of 4.0 which is among the best in his class.
“Banks is a special young man to say the least,” said Parrish, who was named the N.C. Soccer Coaches Association’s Coach of the Year last month. “Just look at how many people are here for his signing. That, in a nutshell, represents Banks.”