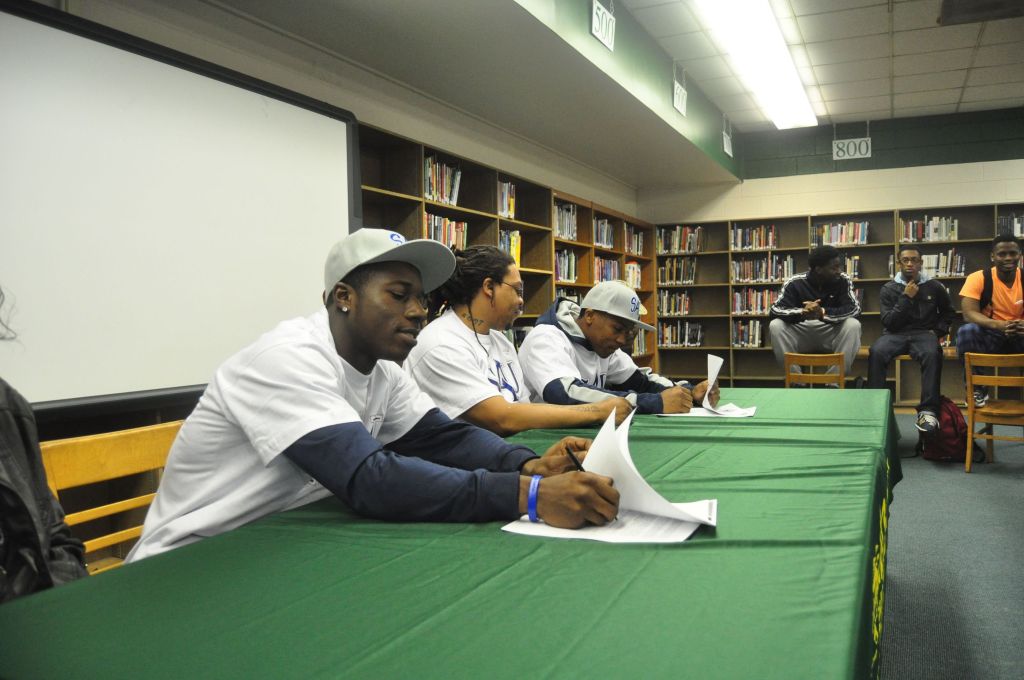 SPENCER — Two silver championship rings dangled around North Rowan’s Xavier Robinson’s neck as he secured his football future at the next level looking for more.
The newly crowned Rowan County Defensive Player of the Year signed to St. Augustine’s University Tuesday afternoon alongside longtime teammate and friend Kasaun Coney in front of family, friends and coaches.
“It’s a blessing,” Robinson said. “The main thing is going there and getting my education with football second. I just have to go in there and work hard. It’s going to be hard learning a new system and new plays, but once I learn the coaches and learn the system, it’ll be alright. “I’m ready to take my talents there,” he added, channelling his inner LeBron James.
After receiving offers from UNC Pembroke, Catawba, Livingstone and Elizabeth City, Robinson said the decision to chose St. Aug’s was simple.
“The coaches,” he stated. “The coaches really welcomed me and Kasaun. They told us that if we needed anything they would be there and they would teach us how to be young adult men.
“The school is nice. The campus is sort of like Catawba — it’s small and close to home,” he continued. “It’s like one big family and that’s what I want to be apart of.”
Robinson heads down the road to Raleigh after a standout senior season where he garnered county and conference defensive player of the year honors after shining on a stout North defense full of stars that finished the year 13-1.
The 6-foot-1 linebacker tallied 145 tackles on the year, including eight games with double-digit stops, with 16 tackles for loss. He added three forced fumbles and two interceptions, while also scoring eight rushing touchdowns as a running back.
“I want to play defense and just hit guys,” he explained. “Offense is not a bad thing, but I just want to get my shine on defense.
“St. Aug’s plays freshmen so I look at the chance to go in there and do my work and study hard and play hard, I expect to get on the field.”
“I think everyone knows Xavier as a player — county and conference defensive player of the year. He was the leader of our football team,” North head coach Joe Nixon added. “Xavier is a very special football player. He’s got great size, great speed and great instincts…but with all that being said, he’s a better person. I’m excited for him to get the chance to go on and get his education paid for and play college football.”
But to top the whole signing experience, Robinson was able to sign his letter of intent next to Coney, his childhood friend.
“Me and Kasaun have been together since YFL,” he said. “It’s a good opportunity for me and him to go to the same school and show our talent.
“It’s going to be fun to be on the field with him again. I can yell at him because we know each other,” Robinson joked.
Nixon said the experience will make the pair “inseparable” on and off the field.
“It’s very special for them,” he said. “Those are our two leaders of the football team. They’ve been friends as long as they can remember. And for those guys to go to school, not only as high school teammates, they get to be college teammates as well. They’ll be friends for life because they’ll be inseparable.”
Robinson then looked down at his necklace where he keeps his championship rings close — one from track and one from wrestling. And after coming up short of winning a third during his senior season on the gridiron, Robinson said he and Coney will get to work on adding one in football.
“We’re going to try and get a ring up there,” he said with a laugh.