Wineka column: Spenser, the beer-drinking cat, is thief at heart 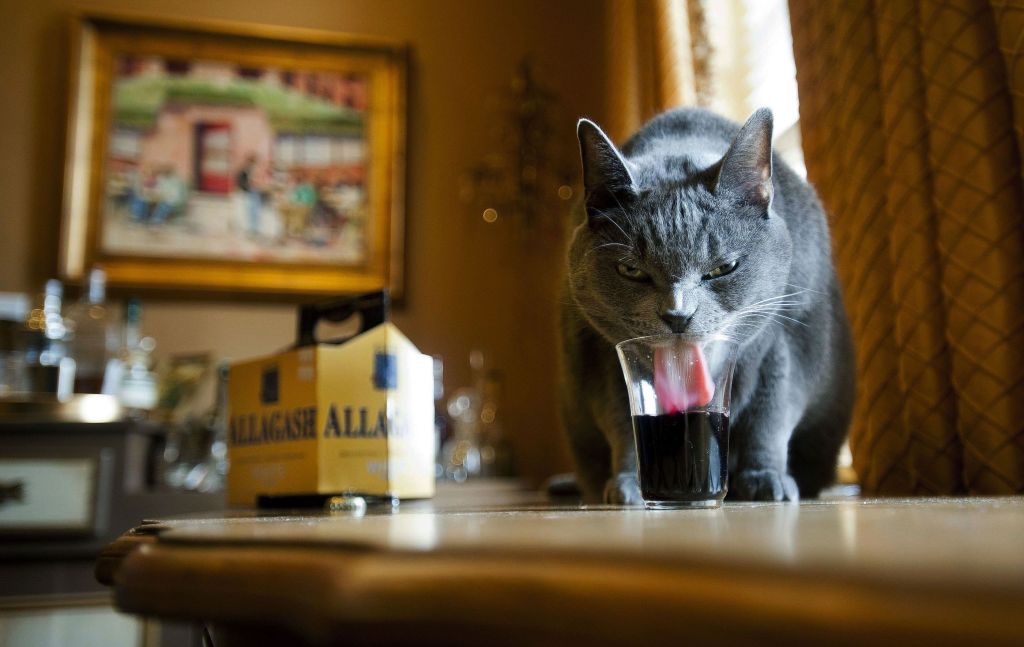 SALISBURY — Let’s say this up front: Spenser is not your ordinary cat.
He comes running when owner Bob Potter calls his name. He plays fetch, like a dog. He’ll lie down on Potter’s command, and when Bob asks for a kiss, Spenser always obliges.
Spenser also is a beer and wine connoisseur, fitting for Bob and Stephanie Potter, owners of the Salisbury Wine Shop at 106 S. Main St.
The Potters discovered Spenser’s taste for alcohol by accident.
About six years ago at home, Bob opened up a black IPA (India pale ale), poured himself a glass, and when he left to go into another room, he set the beer on a kitchen counter.
On his return, Potter spied Spenser up on the counter and drinking the beer like Otis Campbell out for a Saturday night in Mayberry.
“I was flabbergasted,” Bob says. “I couldn’t believe it.”
It turns out Spenser was hooked, and he would go on to display a discriminating taste in his beer. No Millers or Budweisers for him.
“He likes craft beer — he likes good craft beer,” Potter says.
The Potters couldn’t open up a bottle of one of their craft beers or leave their beer glasses unattended without Spenser’s need to satisfy his new craving.
Bob Potter stresses that he and Stephanie aren’t intentionally setting out beer for Spenser to drink. Rather, he steals drinks when they’re not looking. He’s pretty much a thief.
“We love our cats,” Bob says, “and we’d never do anything to hurt them.”
Stephanie later learned, again by accident, that Spenser had the same affection — or affliction — for red, white and sparkling wine.
Over the years, Spenser also has stolen sips of Bloody Marys, because he seems to like the spicy V-8 juice. In addition, he has been known to taste the remnants of a margarita.
“It kind of takes people by surprise when they see this happen,” Bob says.
Just for demonstration purposes, Potter opens up a chocolate stout, pours it into a glass, and Spenser moseys across the table for a quick taste of the beer’s foaming head.
He doesn’t think much of a wheat beer offered to him later, but soon his tongue is lapping up some red wine Potter has poured.
“Spenser, be good,” Potter says, deciding it’s time to cut the cat off. “… He’s in the mood for wine.”
About 9 years old, Spenser is a husky gray cat with a lot of Russian blue in him. He weighs close to 20 pounds, but it’s not because of beer, Bob says, as Spenser gives him another kiss.
Before he was married to Stephanie, Bob Potter first noticed Spenser while he was getting his car’s oil changed at Grease Monkey. At the time, the business was routinely accepting two cats from the animal shelter and trying to find homes for them.
Potter and the gray cat, then 2 years old, struck up an immediate friendship. Spenser soon went home with Potter for good.
Because he was traveling for work and gone three or four days at a time, Bob noticed how needy for attention Spenser was whenever he returned. He decided Spenser required a companion, so Hawk, rescued from a Greensboro animal shelter, became an adopted brother.
The names “Spenser” and “Hawk” come from noteworthy characters — think of “Spenser for Hire,” the old television series — of author Robert B. Parker.
When Bob and Stephanie married, her cat, Ginger, was part of the package. A fourth cat, Ellie, adopted the couple later, Bob says.
Hawk, Ellie and Ginger couldn’t care less about beer.
Spenser’s appetite for alcohol caused a stir over Christmas when Stephanie’s parents visited Salisbury. The couples were having some wine in the living room when Bob went to check something in the kitchen and left his wine glass unguarded.
He soon heard a commotion from the living room and his father-in-law shouting, “Get away from there! Get away from there!”
Spenser’s head and tongue were planted firmly into Bob’s wine glass. “It surprises people,” Bob reiterates.
The good news for Bob and Stephanie is that Spenser is a stay-at-home cat, and not a store cat.
Can you imagine him at the wine shop?
Contact Mark Wineka at 704-797-4263, or mwineka@salisburypost.com.