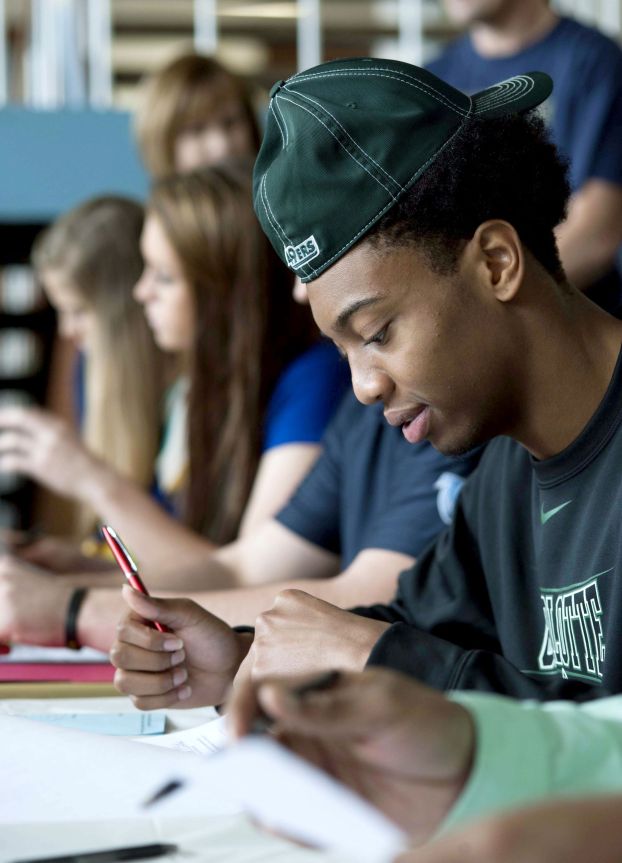 MT. ULLA — Najee Tucker wore his green Charlotte 49ers cap backwards on National Signing Day, but the West Rowan free safety’s career is moving steadily forward.
Tucker is healthy now, swift, strong and getting swifter and stronger every day, but the screw in one of his knees is a reminder of how close he came to losing athletics before his freshman year.
He was mostly a basketball player then, and he tore a knee apart in a summer game. That set him back a year and bothered him for two.
“Just a devastating injury,” West football coach Scott Young said. “Couldn’t play at all his freshman year. Then he dragged the knee his whole sophomore year. So that D-I scholarship he’s signing today, that came from just his junior year. That’s how good Najee can be.”
Tucker is usually listed at 6-foot-2, 200. He’s a little lighter than that now, as the constant running involved in a long basketball season has him down to 190. But the good news is he’s grown to 6-3.
“Charlotte loves his height,” Young said. “And they love his length and his upside.”
Tucker was Charlotte’s first commitment for its 2014 recruiting class. He verbally committed prior to his senior season before Charlotte’s program had ever made a tackle or a touchdown. He sealed that early promise with his signature on Wednesday, as classmates and teammates applauded.
It didn’t take Charlotte long to realize it wanted Tucker. It may have taken even less time for Tucker to realize he wanted Charlotte. The 49ers shared the honor of being his first offer. Ball State also offered him that same day.
“There also were ACC teams interested in me and I guess I could’ve waited to see what happened, but Charlotte had everything I wanted,” Tucker said. “I like how the school and the football program are growing, They had some good wins in their first year and also some tough losses, but that’s just part of the football experience. Their fan base is already great. There’s a lot over there that’s brand new and they have a big plan for the future.”
Charlotte’s 2014 schedule will again be a wild mix of all levels of opponents, but starting in 2015 the 49ers will compete in Conference USA against a series of name foes.
“They’ll be adding an upper deck to the stadium and playing night games,” Tucker said. “I can see it being a lot of fun playing there.”
Tucker has had his share of fun at West. He’s scored 534 points as a starting forward for the basketball team, and he got to compete in the 2011 3A football state championship game as a sophomore.
That was the season he was still favoring the repaired knee, but he dragged it 65 yards on an interception return to score against East Rowan.
His junior season, Tucker had a pair of defensive TDs for a 10-3 team. He returned a fumble 65 yards against Mooresville and logged a pick-6 against West Iredell.
West fell to 6-6 his senior year, but it was Tucker’s best season. He stood out on specials teams as well as defense. He clinched the heated win against East Rowan by taking an interception all the way and he had another pick-6 called back by a roughing-the-passer penalty in the Northwest Cabarrus game.
Still, it was the emotional 31-27 victory against Davie that he’ll remember most from his senior year. He intercepted a deep ball and also made the game-changing stop on Davie’s outstanding back Cade Carney when the War Eagles gambled on a fourth-and-short running play.
“He’d been falling forward for yards when we tackled him all night,” Tucker said. “But that was a play where I had to make the stop right where he was, and I was able to do it.”
That Davie game showcased both dimensions of Tucker — the acrobatic pass defender and the physical run-stopper — versatility that should make him succesful at the college level.
Tucker is also a good student interested in a career in physical therapy.
That screw in his knee is a constant reminder of how important physical therapists are.