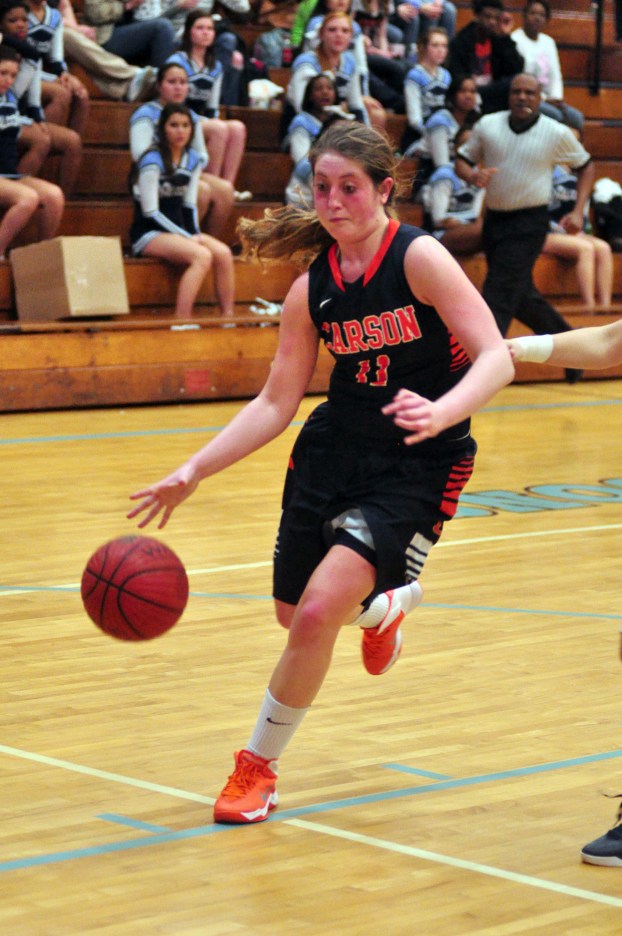 MT. ULLA — Carson’s Alex Allen and Kate Cole combined for two field goals in the second half.
Early this season, Carson would’ve been blown out if Allen and Cole were quiet for a half, but the Cougars were able to win 46-37 at West Rowan on Monday.
The reason was Sydney Huffman, who scored a career-high 16 points and made some of the game’s biggest plays. You would’ve bet your house prior to the game that West’s talented Khaila Hall would be the game’s top scorer, but Huffman did what she did, and Hall was held to 13.
Carson (8-10, 6-6 SPC) beat West (6-14, 4-8) for the third time.
“Our girls don’t always do things right,” Carson coach Brooke Misenheimer said. “But they do leave it all out there, and they played as hard as they can play tonight. I’m proud.”
Huffman scored in double figures for the fourth time this season — and for the third straight game.
“She works,” Misenheimer said. “She does the little things, runs the floor.”
Allen got the Cougars started, whipping passes for layups, dominating the boards and making shots.
Allen scored eight of her 13 points early, and the Cougars led 14-4 after a quarter and 26-16 at the break.
Huffman out-sprinted the Falcons several times, and Allen was the one getting the ball to her.
“I think I got down the floor so fast because I forgot to rebound,” Huffman said with a laugh. “I like to keep moving. I can’t stand still.”
A trey by Cole put Carson up 31-18 in the third quarter, but West rallied with Hall twice hitting Taylor Martin for fastbreak layups.
“I couldn’t ask for more effort-wise,” West coach Ashley Poole said. “But it was a night that our shots didn’t fall very often.”
West closed within 37-31 heading to the last five minutes, but Huffman had a huge three-point play and followed it with a putback to keep Carson safely on top.
“We lost some great players from last year,” Huffman said. “It’s time for me to help out and step up.”
She did that. She was the difference in this one.
CARSON (46) — Huffman 16, Allen 13, Cole 8, Roberson 6, Gray 3, VanVoorhis, Clark, Jackson, McClary.
WEST ROWAN (37) — Hall 13, Martin 10, Cowan 4, Greene 3, Alessandrini 2, Lovell 2, Q. Miller 2, S. Miller 1, Yow.
Carson 14 12 9 11 — 46
W. Rowan 4 12 11 10 — 37