Why rare Cobras come to Salisbury 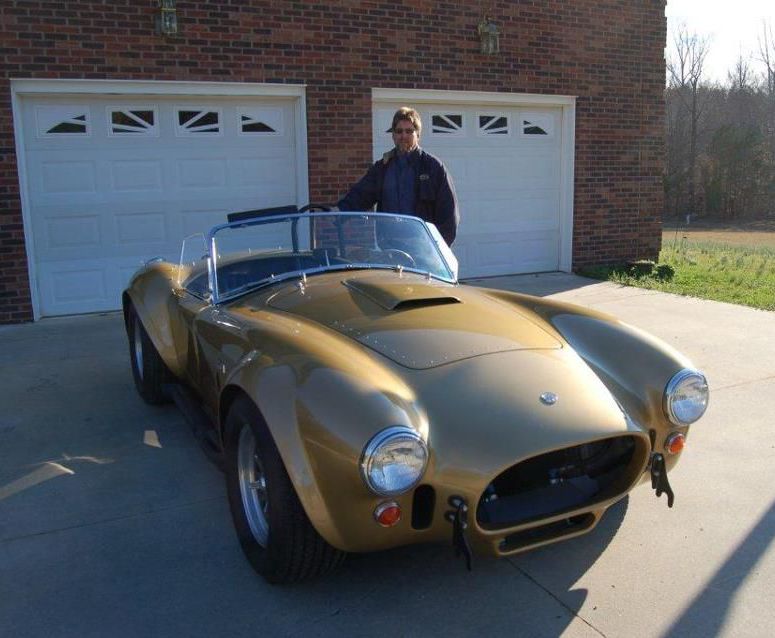 Voluptuous. Menacing. Stunning. Outrageous.
Those were a few adjectives that came to mind recently as I beheld — OK, drooled over — a rare piece of automotive history at a shop in Salisbury.
It was a Shelby Cobra — one of the real ones. To be precise, a 1965 427 SC Cobra, chassis number CSX 3021 — the first of only 29 of the 427 Ford-powered semi-competition examples built by Shelby American, and one of only two finished in the iridescent hue known as “Hertz gold.”
In some ways, it’s a time capsule as well as one of the most iconic cars ever made. Since leaving Carroll Shelby’s legendary hands almost half a century ago, the Cobra has rolled up only about 3,800 thoroughly documented miles. It is well-traveled, though, having been displayed at concours car-show events on both coasts, but these days it hits the road in a fully-enclosed trailer.

With its shimmering gold paint and captivating curves, it’s a cliche to say the car looks like a million bucks, but it’s also literally true. That’s what it sold for at auction — $1,028,500 — a few years ago when it passed into the hands of Wayne Odle of New Jersey, only the second owner. So how did it come to be hunkered down in the paint booth at ESP Motorcars on Old Concord Road in Salisbury?
Although ESP owner David Brown does award-winning restoration and repair work on many varieties of vintage iron and newer high-performance cars, he’s developed a reputation as a go-to guy for Cobra care and consultation. His reputation rests on word-of-mouth testimonials within the collector-car world, which is how Odle picked ESP. He’d been unhappy with his experiences at another shop elsewhere — “a ripoff,” he says. A friend recommended Brown as someone who not only did expert, meticulous work but just as importantly was, in Odle’s estimation, “an honorable man.”
Tom Cotter, a Cobra owner and automotive writer in Davidson, has helped spread the word about Brown’s work.
“A back road in Salisbury is the last place I’d expect to find a world-class paint and body shop that regularly works on $1 million cars,” he says. “But David Brown has more business restoring Cobras than he can handle. He’s already painted three 289 Cobras for me, and I’ve referred numerous guys from around the country to ESP Motorcars.”
Cotter does have one tongue-in-cheek concern about good friend Brown, however: “We can’t let word get out too much about his fine work, though, because his head might get too big …”

Brown’s pride in his restoration work, which might be described as part art and part engineering, is obvious when he talks about the cars he’s worked on, whether it’s a Cobra or a more common collectible like a gorgeous Austin-Healey 100-6 that was also at his shop the day I visited. For the 52-year-old Brown, this isn’t just a business but a lifelong passion. A Rowan native, he originally considered making a career of photography before his automotive interests pulled him in another direction. He honed his bodyworking and paint skills at shops in the area before opening ESP — Exotic Sports and Performance — Motorcars in 1988.

While Brown’s own favorite sportscar flavor may be Lotus — a few of those are parked in and around the shop — he understands the addictive bite of the Cobra and why Shelby’s mating of a lithe British roadster body with raucous American V8 power is a dream ride for many gearheads. It’s beautiful and beastly at the same time, especially in its fat-fendered, side-exhaust-piped SC version, with more than 500 horsepower. This is automotive anarchy, as well as rolling art.
“It’s all about performance,” Brown said. “It’s basically a race car you could drive on street. It combined some of the British mystique with American muscle. And there’s also its great racing history. It’s the American version of Ferrari.”
Even with his expertise and experience, Brown acknowledges there can be a bit of trepidation in working on a Cobra this rare and valuable. The sturdy Yankee drivetrain may be sledgehammer stout, but it throbs within a thin aluminum shell. One errant slip of a tool could dimple the flawless bodywork or leave an unacceptable blemish on the pearlescent paint.
Now to worry, however. As Odle, Cotter and many other Cobra owners have learned, their prized snakes are in good hands here in Salisbury.
Chris Verner is editorial page editor of the Salisbury Post. You can find more information about ESP Motorcars on its Facebook page.

Taking life’s showers as they come