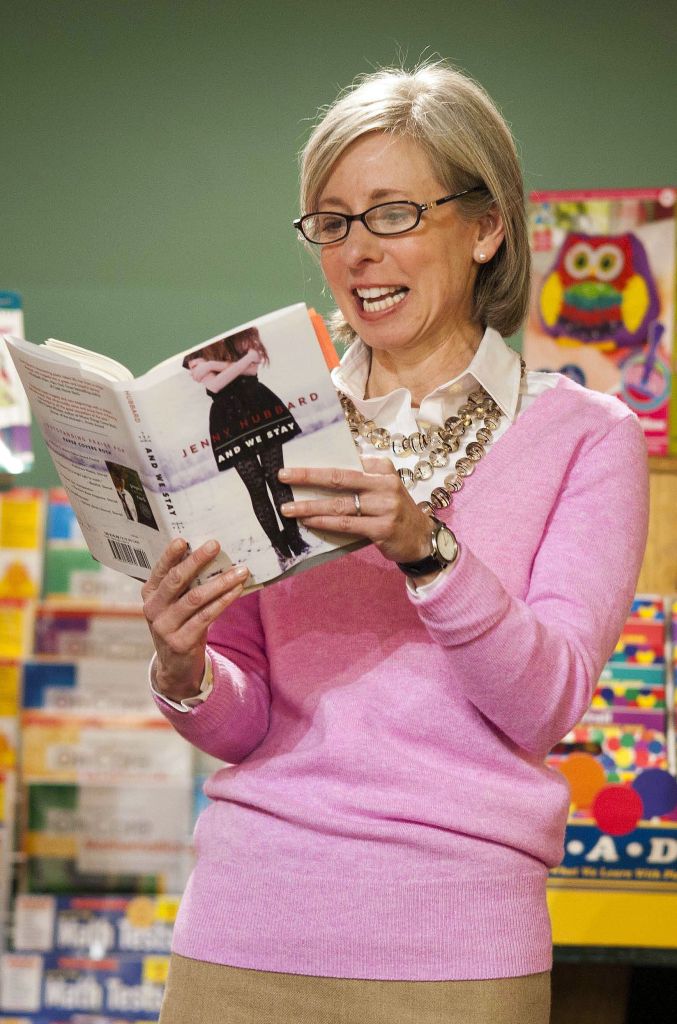 She read to an appreciative, if small, audience from the book that draws inspiration from Emily Dickinson.

“This book is about aftermath,” Hubbard said. The idea came from the Columbine shootings several years ago, but in this book, the shooter kills himself and no one else.

He leaves a lasting effect on young Emily Beam, who finds herself at Amherst School for Girls, feeling quite out of place, wearing the wrong clothes, the wrong shoes — rubber-soled Mary Janes.

Emily Beam, like Emily Dickinson, writes poetry to cope with all the changes around her. Hubbard writes that the lines are like ribbons and Emily Beam can’t sleep until she ties them all into bows.

Hubbard admitted she was no Dickinson fan until she started researching the poet for this book. Dickinson, she said, wrote poetry to break out of the restrictive bounds of the 1860s. Emily Beam does the same thing — the character writes 30 poems by the end of the book. Of course, the poems are Hubbard’s. One critic said the poems were too sophisticated for a teenager.

“Well, that’s just how it is,” Hubbard laughed.

Dickinson wrote 1,775 poems and hid them under her bed. Emily Beam’s 30 poems become an anthology of her life.

“I wrote this book so I could learn to appreciate” Dickinson, Hubbard said, describing the poet as a scientist who had very deep feelings.

Hubbard told her fans to pay attention to the names in the book — Beam, like a beam of light; a Ms. Albright, Dr. Ingold, and another name that means goldenrod. “There’s light in here.”

Some of the 30 poems were already in Hubbard’s file, while she wrote some just for the book.

Hubbard, who taught at Woodberry Forest, an all-boys boarding school, admitted she’d never set foot in Amherst, Mass., where “And We Stay” is set. She never saw Emily Dickinson’s house, featured in the book, but she spent lots of time on the Internet researching and reading. She even used Google maps so she could name the streets in Amherst.

Dickinson lived in a time when death was much more an everyday event due to illness and disease. The flu took five of her closest friends. Death is a huge theme in her work, perhaps because her bedroom overlooked the town graveyard.

“And We Stay” starts in the winter, Hubbard said on the freezing night of her book launch. “This is the perfect night.”

She says there’s not much of a connection between Jenny Hubbard and Emily Beam, but plenty between Beam and Dickinson. “And We Stay” is a line from a Dickinson poem, and Beam uses words to handle chaos.

Look for a review of the book soon on this page.