Scouting for food: Thousands of pounds collected for locals in need 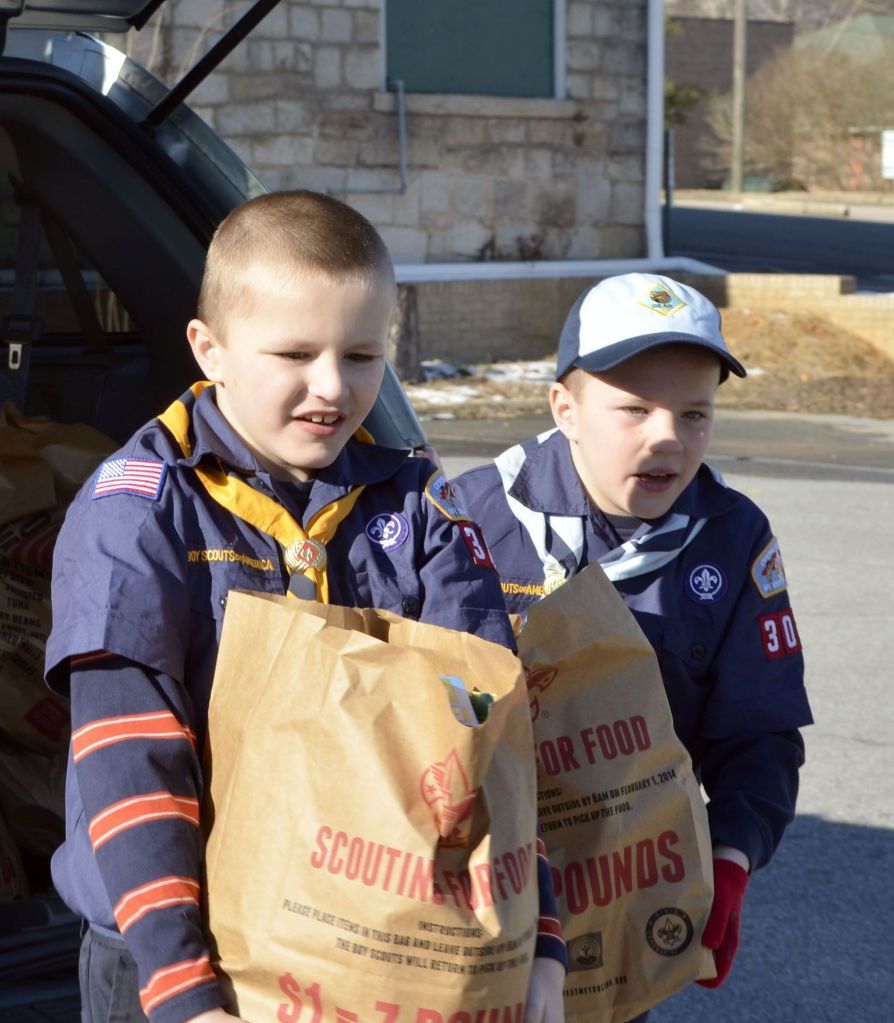 SALISBURY — Local Cub Scouts and Boy Scouts were up early Saturday, collecting thousands of pounds of food for Rowan County’s needy residents.
The annual Scouting for Food program in the Central N.C. Council sends Scouts into their churches and neighborhoods, collecting bags of groceries for Second Harvest Food Bank and other charities.
Since it started in 1985 as a program of St. Louis, Mo., Boy Scouts, the event has spread nationwide.
Boys from Cub Scout Pack 306, based at North Hills Christian School, were out at 8 a.m. Saturday collecting bags from the Plantation Ridge subdivision.
Last weekend, the boys distributed special paper grocery bags to residents, den leader John Barber said.
“We actually did really, really well,” Barber said — collecting 30 bags of food in all, plus one $10 donation from a resident who said she didn’t have time to shop.
Barber said the boys’ enthusiasm for going out on a chilly Saturday was uplifting.
“That’s primarily what it’s about, showing them that there are people who need help, and that it doesn’t take much to get out and help somebody,” Barber said.
His grandson, Layton Barber, 6, is a Tiger Cub. He said it was fun to collect the bags from people’s doorsteps – like trick-or-treating in reverse.
Also, people driving through the neighborhood stopped to tell the Cub Scouts thanks for what they were doing. “It feels really good,” Layton said.
Brandon Talbott, of Salisbury, has three sons in Pack 306. They drove out together on the morning’s Scouting for Food drive, and helped deliver the collected groceries to the downtown Scout office at St. John’s Lutheran Church.
His son Rylan, 8, said the walk around the neighborhoods “felt like 100 miles,” but it was worth it.
His brother Ethan, 9, said he hopes the Scouts set a good example for others. “If (their neighbors) don’t have any food, you can give them some,” Ethan said.
“It’s inspiring to see kids this young getting out and doing this,” Brandon Talbott.
Throughout Rowan County, District Scout Executive John Barden said local Boy Scout troops and Cub Scout packs collected 4,680 pounds of food in 2013.
The majority of what was collected here was sent to Second Harvest Food Bank, while a few units donate directly to local charities such as Rowan Helping Ministries, Barden said.
As of 3 p.m. Saturday, Barden and fellow District Scout Executive Tyler Jones had checked in just over 3,180 pounds, and Jones said there were still several units yet to report in.
“We still may meet that total from last year,” Jones said, bringing in “a ton of food, literally,” and then some.
Although local Scout execs didn’t have a head count for this year’s drive, last year, Barden said, 249 Scouts and volunteers took part in Scouting for Food.
Barden said the food will provide more than a meal for those who receive it.
In addition to nutrition, Barden said he hopes the food will boost the morale of those who’re nourished by those groceries.
And, Barden said, Scouting for Food “reinforces the 12 points of the Scout Law, particularly kindness, being helpful and friendly.”
“It also teaches the importance of community,” Barden said, “being an active participant rather than just being a member of that community.”
Jones said Scouting for Food, alongside other outreach activities, “lets the community know the Scouts can be depended on to do a good turn daily, to get out there and serve people.”
Lynne Prowker, a volunteer with Troop 476 based at Thyatira Presbyterian Church, Mt. Ulla, said Scouts there had handed out bags at last Sunday’s services, since there aren’t as many neighborhoods in which to collect.
As of 3 p.m., Troop 476 had collected the most food of any one unit, with 837 pounds in all and possibly more still to come in.
Barden said local residents who didn’t get their Scouting for Food bags out in time Saturday can still give by calling the district office, 704-982-0141, and arranging to have their food donation picked up.