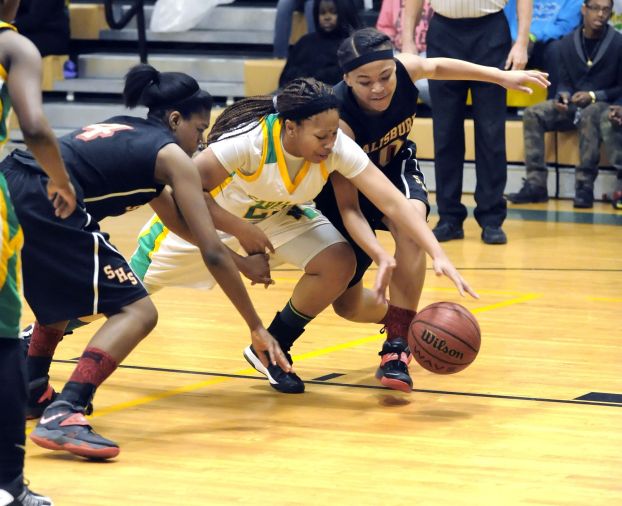 SPENCER — North Rowan’s girls ended an 18-game losing streak against Salisbury with a 57-44 CCC win on Saturday.
Second-place North hadn’t beaten the Hornets since 2006.
“It was weird playing against Salisbury for the first time,” said North’s Ashley Blaire, who was a Hornet last season. “Salisbury did a good job today and we gave them too many easy shots, but we executed and we won.”
North will play the rest of the season without Brielle Blaire, Ashley’s older sister, and played most of Saturday without springy Aliyah Farmer. Farmer was hurt in a collision on the court. It’s too early to know for sure, but she likely has a concussion.
North still had too many scoring options for Salisbury.
Ashley Blaire had a huge first quarter. Demeria Robinson scored all of North’s points in the second quarter. Nycieko Dixon carried the load in the third quarter. Then Special Washington finished strong.
All four scored in double digits and they combined for eight 3-pointers.
“They couldn’t miss today,” Salisbury coach Lakai Brice said.
Ashley Blaire couldn’t miss early. She had 10 of her 14 in the first quarter, as North (13-3, 5-1) sprinted to an 18-4 lead.
“We shocked them at the start, but to Salisbury’s credit they regained their composure and stayed in the game,” North coach Brian Lytton said. “Their zone helped them control the tempo. Usually we can shoot people out of zones, but we missed often enough that they stayed in it.”
Salisbury (6-14, 1-5) has lost nine of its last 10, but Nyasia Harris, Breya Philpot and Juliana Anderson hit the offensive board hard and outscored North 14-8 in the second quarter. North needed eight points in that quarter from Robinson, including two long 3s, to lead 26-18 at the half.
Dixon scored 10 of her 15 in the third quarter as North pushed out to a 17-point lead.
“We did a pretty good job offensively,” Lytton said. “We’re learning what kind of shots to take — and when to take them.”
But the Hornets rallied again late after Sierra Charles had a four-point play, sinking a 3-pointer as she was fouled.
When Monifa Angle scored off a steal, the Hornets were only down 52-44 with 1:15 left, but a layup by North’s Ashlyn Mills and a 3-pointer by Dixon ended the scoring.
“After getting rattled at the start, we settled down, got back in it and made it a pretty good game,” Brice said. “North hurt us in transition some and they made big 3s, but overall I was proud of what we did. Our time will come.”
SALISBURY (44) — Angle 11, Harris 9, Alexander 8, Philpot 6, Anderson 6, Charles 4, Wolfe, Caldwell.
NORTH ROWAN (57) — Dixon 15, A. Blaire 14, Robinson 11, Washington 10, Farmer 2, Mills 2, Royer 2, Allen 1, White, Russell.
Salisbury 4 14 10 16 — 44
N.Rowan 18 8 19 12 — 57