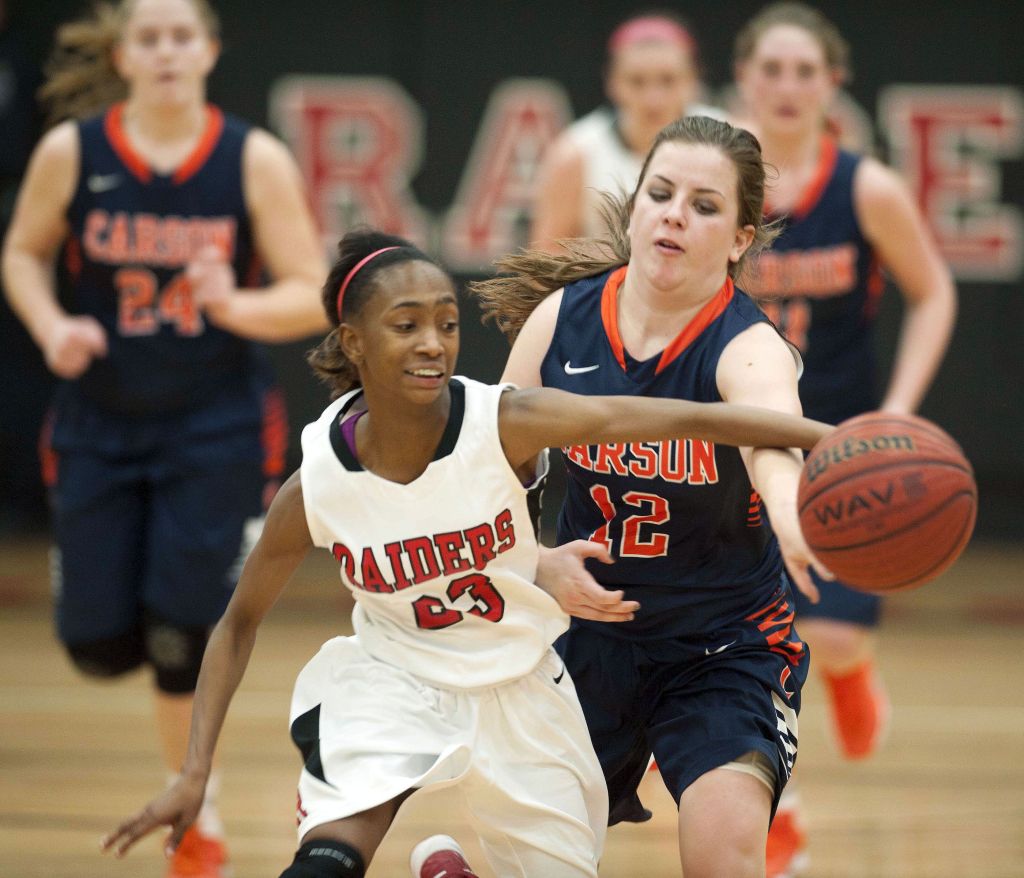 LANDIS — The most worrisome injured right hand in Landis did just fine Friday night.
So did Avery Locklear’s left hand, which played a pivotal role in South Rowan’s 63-44 SPC win against visiting Carson.
“It’s a good thing I’ve always been able to use my left (hand),” Locklear said after converting 13 of 16 free throws and totaling 25 points. “This just gives me more confidence in it.”
Locklear — who missed seven games after breaking two bones and spraining a knuckle on a right-handed practice layup that went horribly wrong — is now averaging 23.5 points-per-game since returning four contests ago.
“She’s right back on track,” winning coach Jarrod Smith said after South (11-7, 8-3) captured its sixth straight decision. “She spent four weeks working on her left because she couldn’t shoot with her right. Right now she’s a better left-handed player and still a pretty good right-handed player. This makes her even tougher to guard.”
Locklear was the leading lady against the stumbling Cougars (7-10, 5-6), but she had a terrific supporting cast. Teammates Lynsey Corriher (12) and Cassidy Chipman (10) combined for 22 rebounds. Junior Kayla McClendon made two sparkling plays that netted five points in a 30-second sequence that helped South crack open a close game in the fourth quarter. And Locklear, who failed to make a basket against Carson’s triangle-and-2 in the first half, scored 20 second-half points and made seven steals.
“(Locklear) did a good job of using her body and making us foul her,” said junior Alex Allen, Carson’s top scorer with 19 points.
Even losing coach Brooke Misenheimer — miffed about the Cougars’ sloppy ballhandling — found kinds words for Locklear.
“She’s just a scorer,” Misenheimer said. “She’s able to put the ball in the basket. She’s able to use both hands well. I think we had the right game-plan. We could have done a better job cutting her off in the second half. But they were able to set screens for her and get her some open looks.”
Carson — which beat South 49-47 when the teams met earlier this season — was actually more resourceful than scary. Despite 16 first-half turnovers it trailed only 27-24 at the break, thanks chiefly to Allen’s 10-point contribution. It was still a tight match after Kate Cole’s free throw drew the Cougars within 37-33 after three periods. And it was 43-40 following a pair of Sydney Huffman free throws with 6:07 remaining.
“That’s where we got stuck,” said Misenheimer. “We never could make it over that three-point hump.”
Instead South seized the momentum and used a 20-4 finishing kick to win handily. A key juncture came when McClendon — an active, 5-foot-6 forward — hit a set shot from the right baseline that put SR ahead 48-41. Seconds later she stole the ball, drove for a layup, was hacked by Allen and converted an old-fashioned three-point play, providing a 51-41 advantage.
“Our team seemed a little dead, like we were going through the motions,” McClendon smiled afterward. “I had to sit in the third quarter because I got upset. But when I came back in I just wanted to get us going again.”
Smith was certainly pleased.
“The last time we played them we were up by three or four and they found a way to win in the fourth quarter,” he said. “Tonight we found a way to put it away. You could tell we were ready to explode, but we didn’t make it happen until McClendon made those two plays.”
Down the stetch it was more of Locklear driving through seams in Carson’s defense — first right, then criss-crossing to her left for highlight-reel baskets. Her last came on a soft kiss off the glass with 1:12 to go.
“It took me a while to get my rhythm back,” she said. “Now my right hand’s almost a hundred percent. I can’t baby it. I can’t play scared. You just gotta get back in there and play.”