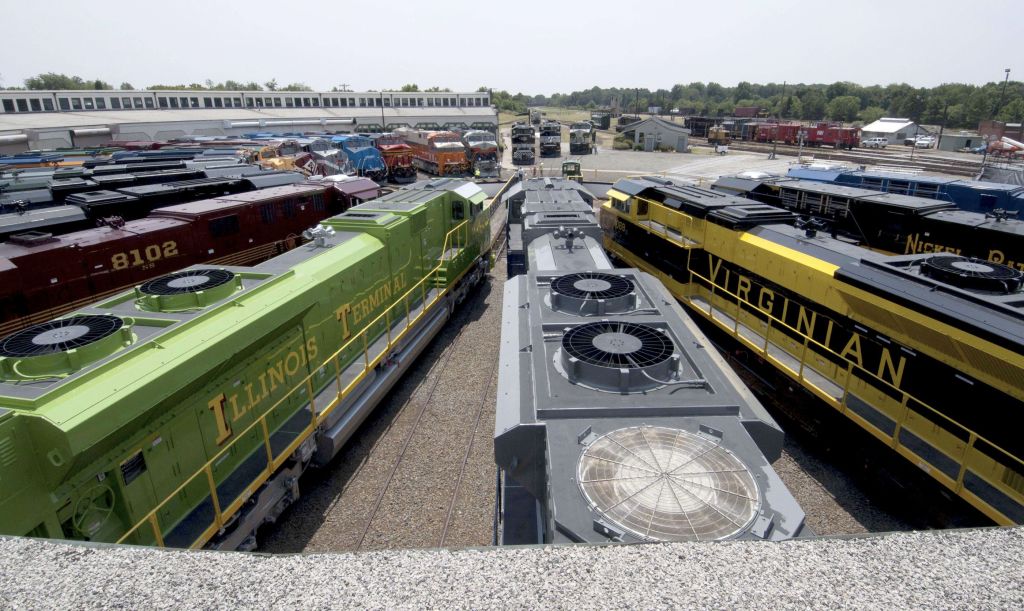 SPENCER — Tickets for Streamliners at Spencer will go on sale at 9 a.m. today. The four-day festival, May 29 to June 1, will include Streamliner locomotives of the 1930s through 1950s gathered around the Bob Julian Roundhouse at the N.C. Transportation Museum.
Primarily a photography event, Streamliners at Spencer will include special operations, daytime locomotive portraits, nighttime photo shoots, the Amtrak exhibit train, special appearances by railroad industry figures and railroad artist Andy Fletcher.
A special preview day, featuring the last of the engines to arrive, special movements, site preparations and more will be held May 29. Tickets for the preview day are $40 per person in advance. Tickets will be $45 on the day of the event.
A special Streamliners “Celebration at the Station” will be held the night of May 29 at the nearby Salisbury station, featuring live music, guest speakers and a BBQ and chicken dinner for $20 per person.
Regular daytime admission to Streamliners at Spencer for activities running May 30 through June 1 will be $30 for adults and $20 for children per day if purchased in advance. The price increases to $35 for adults and $25 for children per day if purchased on the day of the event.
Nighttime photo shoots Thursday through Saturday will be $25 per person, per night.
Combo tickets and group discounts will be available, along with discounts for N.C. Transportation Museum members and Norfolk Southern employees. More information about the day-to-day operations and ticket prices are available online at www.nctrans.org.
Two more locomotives have been confirmed for the event. The Soo Line No. 2500-A and the Reading F7 No. 284 bring the total number of units to 14 confirmed. More locomotives will be announced in the coming weeks.
The Soo Line No. 2500-A was built in 1949 as a “demonstrator engine.” During the period when railroads were transitioning from diesel to steam, General Motors’ Electro-Motive Division created diesel engines and sent them to railroads to show how well they performed. The No. 2500-A was just such a unit, and along with two others, was sent to the Canadian Pacific Railway, then to Canadian Pacific’s subsidiary, the Soo Line. The locomotive performed very well and the Soo Line purchased the engine in May of 1950.
Originally pulling passenger trains, like the Laker from Chicago to Duluth, the 2500-A spent the bulk of its career pulling freight trains. When the locomotive was retired in 1986, it was donated to the Lake Superior Railroad Museum and underwent a massive restoration. The 2500-A has traveled widely and is often used to pull trains on the North Shore Scenic Railroad.
The Reading F7 No. 284 is one of four F7 class locomotives owned by the United Railroad Historical Society of New Jersey. Built in 1949 for the Chicago and Northwestern Railroad as No. 424, it was sold to New Jersey Transit in 1983 retaining No. 424. It was retired in 1985 and stored until donated to the URHS along with three others in 1991.
The No. 284 has been painted in the Reading passenger scheme and given what would have been the next number in the series Reading gave to its F7 locomotives. Because the Reading was proactive in upgrading motive power, it traded in the F7 fleet in 1964 for more modern equipment. As a result, none of these F7s remain, giving the Reading 284 an important role in telling the story of vintage New Jersey railroading.
The participation of all resident and visiting locomotives is subject to timely transportation and mechanical availability.
Tickets will be available online at www.nctrans.org or by calling 704–636-2889 extension 237 or 257.