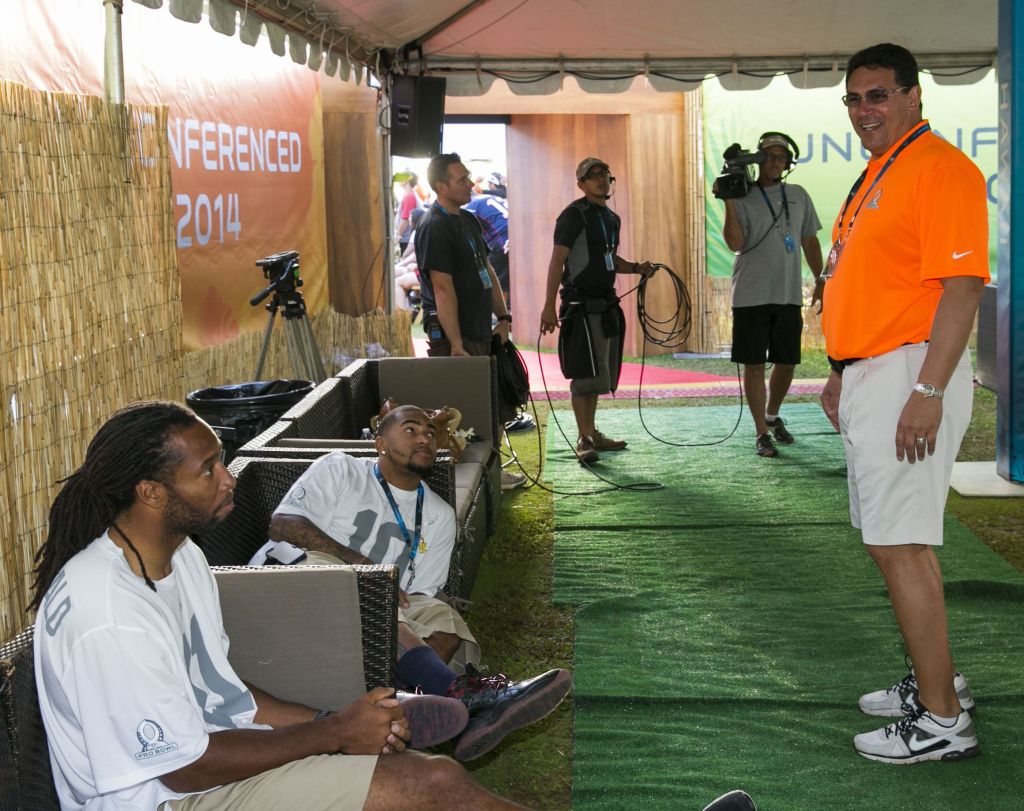 CHARLOTTE — Ron Rivera is staying in Carolina after leading the Panthers to their first playoff appearance since 2008.
The Panthers rewarded “Riverboat Ron” on Tuesday with a three-year contract extension that runs through the 2017 season after Carolina finished 12-4 this season and won the NFC South championship.
Carolina lost at home in the divisional playoffs to the San Francisco 49ers.
Rivera started the season on the hot seat after a 1-3 start, but the Panthers rebounded to win 11 of their final 12 regular season games to earn a first-round bye in the playoffs.
Rivera had one year left on the four-year, $11.2 million contract he signed in 2011 when first hired as head coach.
Financial details of the new deal were not immediately available.
“The improvement of our team has been reflected in the progress of the record over the last three seasons under Ron and we look forward to building upon that foundation,” Panthers owner Jerry Richardson said in a release.
Rivera is 25-23 in three seasons as the Panthers head coach.
The decision to extend Rivera isn’t surprising.
Panthers general manager Dave Gettleman said two days after the season ended he had “ultimate faith” in Rivera as the team’s coach.
He made good on that statement this week, giving Rivera three additional seasons at the helm.
“The team has shown improvement under Ron each year and he is deserving of the recognition that he has received for the 2013 season,” Gettleman said in the release. “We are pleased and excited with the continuity this extension brings.”
The 52-year-old Rivera went 6-10 and 7-9 in his first two seasons in Carolina, starting those seasons 1-5 and 1-6 respectively.
After Carolina stumbled out of the blocks this year with another poor start there was talk about Rivera’s future with the team.
But following a road win at Minnesota in Week 5, the Panthers got hot behind quarterback Cam Newton and a stifling defense led by middle linebacker Luke Kuechly.
Rivera did his part, too.
He took on a gambler’s mentality after the slow start often going for it — and succeeding — on fourth downs, earning him the nickname “Riverboat Ron.”
“I have been very clear about how much I have enjoyed living in Charlotte and working for this organization,” Rivera said in the release. “I very much appreciate the support and confidence Mr. Richardson and Dave Gettleman have shown in me and our staff.”
Rivera quickly deflected praise from this past season, saying “Any success we have enjoyed is the result of a team effort by players, coaches, scouts and the entire organization, and our ultimate goal remains winning the Super Bowl.”
The next challenge for Rivera will be sustaining that success.
Since joining the NFL in 1995, the Panthers have never been to the playoffs in back-to-back seasons.
The extension comes two days after Rivera led his team to a victory in the Pro Bowl.