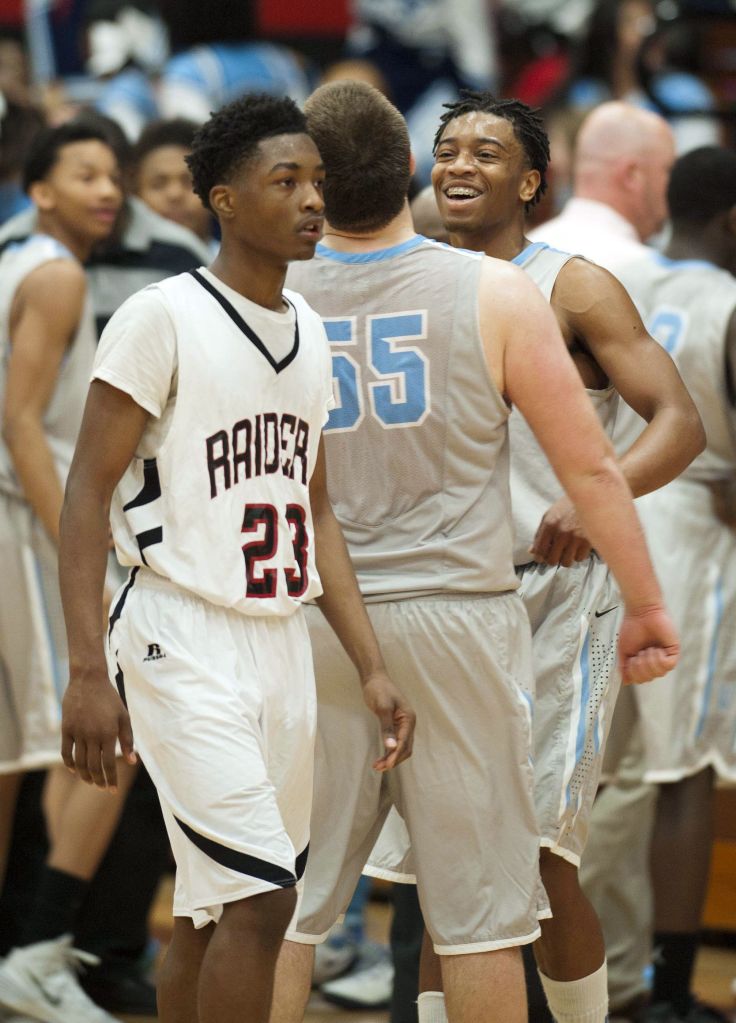 LANDIS — Any time West Rowan needed a timely bucket, in stepped sharp-shooter Seth Martin.
The senior channeled his inner Reggie Miller Friday night in Landis, drilling six 3-pointers — including the go-ahead trey in overtime — to carry the Falcons to a dramatic 70-63 victory over South Rowan in a county showdown.
“A lot of great effort out there,” West assistant coach Willie Ellis said. “The guys played hard and never quit.”
“The past couple games I’ve been quiet, but last game against Northwest, I kind of found my shot,” Martin, who finished three points shy of his career-high with 23 points, added. “It’s always tough playing here at South, so I knew I had to come out and hit shots for my team here.
“When we get down, I want to be the guy to hit the shots,” he continued. “My confidence was really up there when we were in the final minutes and in overtime.”
West looked poised to run away with the game late in the first half, grabbing a 13-point lead on one of Martin 3-pointers just before the half.
After taking a five-point cushion into the break, the Falcons pushed their advantage out to 10 (42-32) five minutes into the third quarter.
But the Raiders responded and staged a furious comeback to get back in the game.
Trailing by seven heading to the fourth, South reeled off 12 of 14 points from five different players to jump ahead 49-45 on a Shawn Spry jumper with 3:51 left to play.
“We came back and just made some plays,” South head coach Bryan Withers said.
But West answered with a spurt of its own, using a 13-3 charge to retake the lead at 58-52 with 51 seconds remaining, putting the pressure back on South.
Spry, who reentered the game in the fourth quarter after sitting much of the second half with foul trouble, played the hero. With time ticking down, Qwan Rhyne dribbled up court and found Spry wide open at the left elbow. The senior drilled a trey with six seconds on the clock to send the wild game into overtime.
Tyreek Wilder tipped in the first points of the extra session to continue South’s late surge, putting the Raiders ahead at 60-58 edge.
But the Falcons bounced back and took control in a hurry.
“We just told them to just stay calm and play basketball like we’ve been doing all night,” Ellis said.
After Chris Hassard sank 1-of-2 free throws, Martin buried one of those timely 3-pointers he’s grown accustomed to, giving the Falcons a 62-60 advantage.
Spry answered with a put-back before West’s Amara Morris hit his first field goal of the night to put West ahead for good at 64-62.
The Falcons then knocked down 6-of-8 free throws in the final minute to survive the thriller.
“When we beat Northwest last game, that was one stepping stone in our conference. We put them in our rearview mirror by beating them twice,” Martin said. “We knew if we could come in here and beat South, that would give us some momentum heading into Carson on Tuesday.”
Withers said that forced shots eventually doomed his team in the overtime period.
“I thought we had the right game plan going into overtime and had things right where we wanted it,” he explained. “But then we forced back-to-back shots when we had a two-point lead.
“If you make plays when you’re up, then you’re fine.”
The Raiders will have to put this tough loss behind them and prepare for Cox Mill next Tuesday on the road.
“We have to put this one behind us,” Withers added. “I saw a lot of hurt guys in that locker room. We’re hurting because we let one slip. We’ve done that several times this year, and that’s something you have to overcome. Eventually you have to start winning those.
“They’re showing some emotion and that tells me that they care.”
As for the Falcons, they return to the court Tuesday against a tough Carson team at home, looking to continue their recent surge.
“We just have to keep playing the way we played tonight,” Ellis said. “We need to get better at what we do and go from there.”