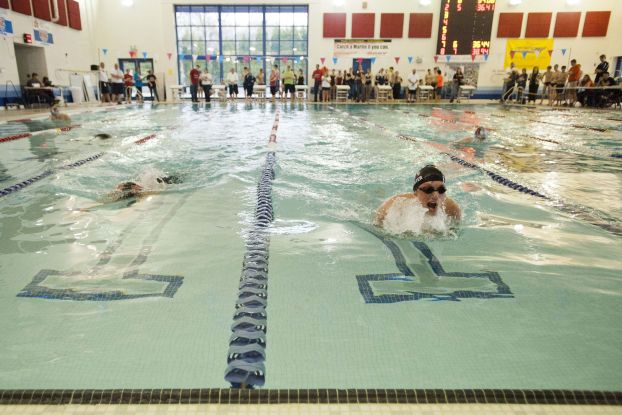 South boys get contributions across the board

It was a tale of two meets on Tuesday at Salisbury’s Hurley YMCA. While South Rowan’s girls coasted to the county title, their boys proved there is more than one way to skin a cat. Despite winning only 1 event, the 100 breaststroke, the Raiders defeated runner-up East Rowan 153.5 to 115.
It was a team effort for South, who had 13 different swimmers score a combined 27 separate times throughout the meet. Compare that to 9 swimmers scoring 17 separate times for East Rowan. No event epitomized this than the 100 butterfly, where Salisbury’s Taylor Rodenhuis and East’s Jason Troutman went 1-2. With no Rodenhuis of their own, South relied on depth. Steven Lyons led the charge with a bronze medal performance, with Hunter Altman in 4th. East’s Wyatt Zander picked up a 5th, but Kurtis and Alex Reed placed 6th and 7th.
If South had leaders, they were Nathan Shorter and Stetson Johnston. Shorter won the 100 breaststroke, while Johnston earned 2 silvers in the 200 IM and 100 back. Dustin Jenkins and Andrew Perry led the Raiders in the 500 freestyle, while Blade Blumenthal and Tristan Wyatt chipped in points as well. Tyler Fuller and Reagan May paced South in the sprints.
East garnered more wins than any other team with 4. Jason Troutman was the leader for the 2nd place Mustangs, fending off South’s Johnston in the 100 backstroke on top of a 2nd place in the 100 fly and lights-out performances on relays. Charles Goff picked up East’s other individual win in the 50 freestyle. Goff, Troutman, Robert Egloff and Drake Adams won the 200 medley relay; while Goff, Beaver Nathan Leazer and Troutman won the 400 freestyle relay.
For Salisbury, Taylor Rodenhuis did as he has for four years: dominated. He took the 200 freestyle and 100 butterfly in convincing fashion. Sprinter Andrew Mason and breaststrokers Max Patel and Matt Woolly also swam well for the Hornets. Woolly was 2nd in the 100 breaststroke, Mason was 6th in the 50 free and Patel tied for 5th in the 200 IM.
In a meet of stars, it was Carson’s John Patella that shined brightest. After four years of hard-earned and little-recognized success, the senior beat out Rodenhuis and Troutman for County Swimmer of the Year honors in impressive fashion, winning the 200 IM and the 100 freestyle.
“Going into the meet, I didn’t really have swimmer of the year on my mind,” Patella said. “I was honestly nervous about the IM. Once I won both individuals, I started to realize that I could actually win it. The 200 free relay win was big for me and my teammates.”
In that 200 free relay, Patella teamed up with Ryan Turney, Heath Mitchem and Henry Brown to defeat South by four tenths of a second. Patella’s lightning quick leadoff leg put the Cougars in a good position, but like Michael Phelps at the 2008 Olympics, he needed a little help from a teammate to win the relay and snatch the meet’s top award. Mitchem played the role of relay all-star Jason Lezak this time, holding off South’s May and East’s Goff.
The Cavaliers got a spectacular performance from Cody Dollarhide, who was third in the 200 IM and romped to a win in the 500 freestyle. Corey Fries (4th in the 50 free), Blake Pegram (6th in the 500 free) and Luke Miller (5th in the 200 free) also did well for North. Chris Johnson (8th in the 100 backstroke) and Thomas Webb (9th in the 50 free and 100 free) led the way for West Rowan.