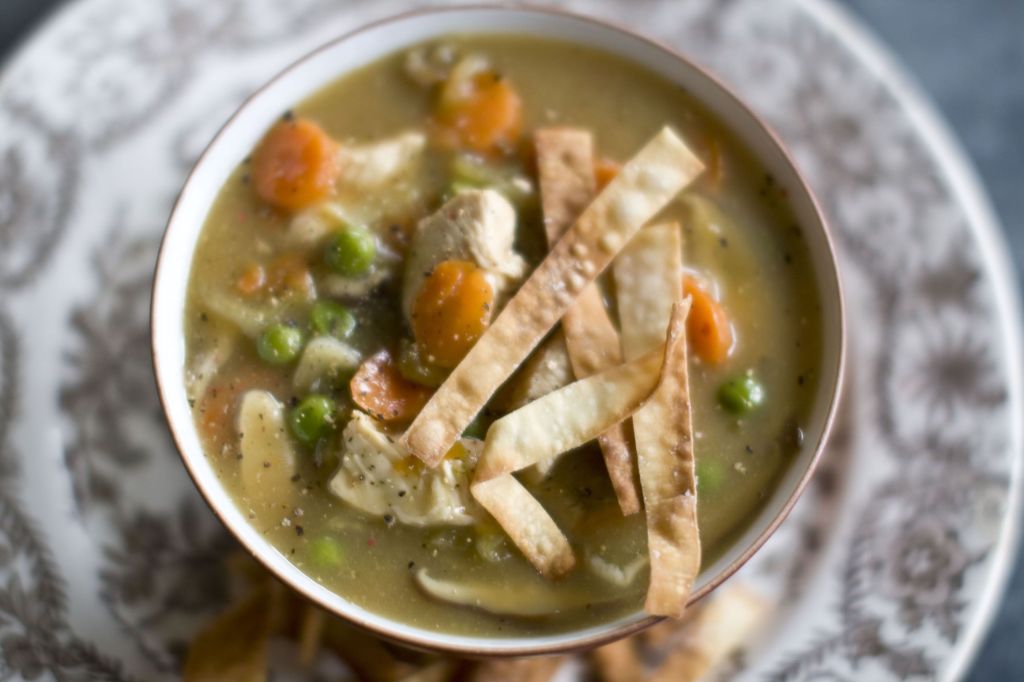 When it’s cold outside, I love making soup for supper. Everything goes into a single pot, starting with an aromatic broth and a substantial array of vegetables, then a little bit of protein, and finally a crispy garnish. And when dinner’s over, there’s only that one pot to wash!
This recipe’s fragrant broth is essentially a Chinese version of a Jewish chicken soup. Folklore has it that the latter is a cure-all, if only because it’s so comforting. But once you add a significant amount of fresh ginger, as I have here, your case for the soup’s therapeutic value is even stronger. Ginger does great things for the body, which is why I keep a big batch of ginger tea simmering on the stove when I’m fighting a cold.
Swimming in this broth are four vegetables — carrots, shiitake mushrooms, bok choy and peas. I chose them not only because they’re the kind of vegetables you might find in a Chinese soup, but also because they are nutritious and provide a fresh array of colors. That said, you’re welcome to swap them out in favor of any number of other winter veggies, including butternut squash, sweet potatoes, turnips, broccoli and parsnips.
But whatever else you add to the soup, make sure that the chicken goes in last. Cut into bite-sized chunks, it takes little time to cook, but it will become tough and leathery if cooked too long.
At the end of it all, you’ll want to add some wonton crisps, which bake quickly and contribute some flavorful crunch. A healthful approximation of the wonderful fried noodles often found on Chinese-styled salads, these crisps spend no time submerged in oil. You simply take fresh wonton wrappers (an all-purpose item you always want to have at hand in your freezer), cut them into strips, toss them with a tiny bit of oil, then bake them until crispy (which happens in a flash). They’re the crowning touch for a soup that’ll warm you from the inside out.
Start to finish: 1 hour
Servings: 4

Heat the oven to 375 F.
Cut the wonton wrappers into 1/4-inch strips. In a bowl, toss the wonton strips with the oil and a pinch of salt. Arrange the strips in a single layer on a baking sheet. Bake on the oven’s middle shelf until golden and crisp, 3 to 5 minutes. Let cool completely before serving.
Meanwhile, place the scallions on a cutting board, then use the side of a large knife or a rolling pin to lightly smash. Cut the ginger into thin rounds, then slice each round into thin matchsticks.
In a large saucepan over medium-high heat, combine the smashed scallions, sliced ginger, garlic, rice wine and broth. Bring to a boil, then reduce heat, cover and simmer for 15 minutes. After 15 minutes, use a slotted spoon to remove and discard the solids.
Add the carrots and mushrooms and simmer gently, covered, for 5 minutes. Bring the liquid to a boil, then add the cornstarch-water mixture in a stream while whisking. Return to a boil.
Add the chicken, bok choy, peas, soy sauce and sesame oil. Cook gently until the chicken is just cooked through, about 5 minutes. Ladle the soup into bowls and top each portion with some of the wonton crisps, if using.
Nutrition information per serving: 380 calories; 35 calories from fat (9 percent of total calories); 4 g fat (0.5 g saturated; 0 g trans fats); 70 mg cholesterol; 45 g carbohydrate; 6 g fiber; 6 g sugar; 35 g protein; 1,050 mg sodium.

Yesterday: Lining up for ‘The Corsican Brothers’ in 1942