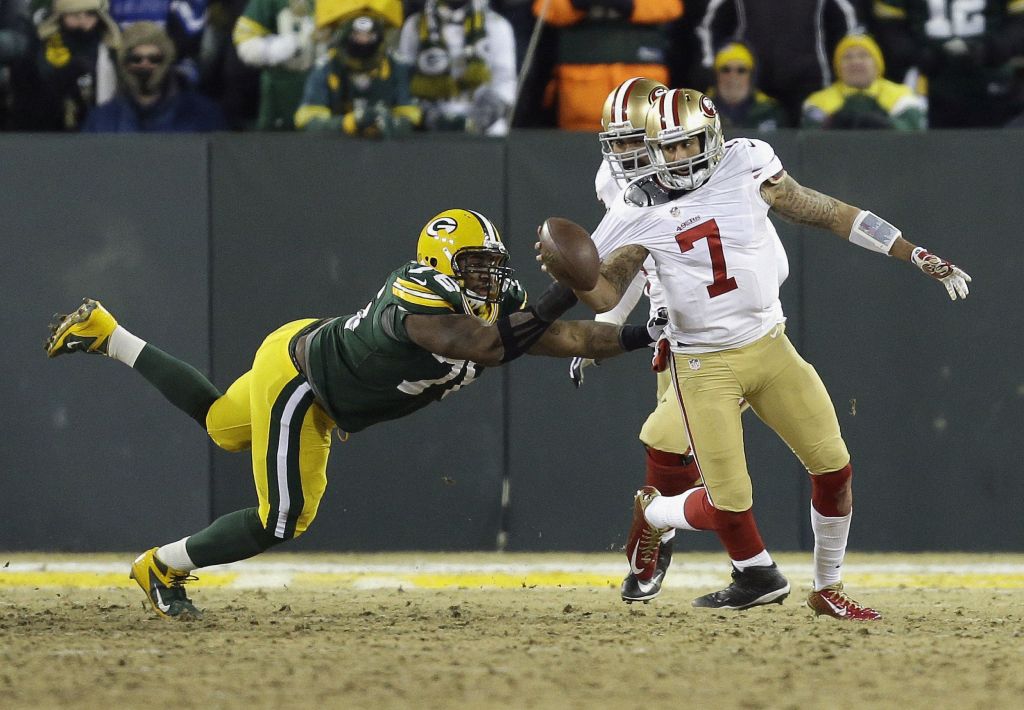 Associated Press
CHARLOTTE — Panthers coach Ron Rivera is expecting a few more big plays from San Francisco 49ers quarterback Colin Kaepernick this time around.
Rivera said Monday that Kaepernick “didn’t play that well” in the first meeting against Carolina on Nov. 10. The Panthers limited the third-year quarterback to 91 yards passing, 16 yards rushing and no touchdowns in a 10-9 win over the 49ers at Candlestick Park.
On Sunday, the two teams meet again in the NFC divisional playoffs in Charlotte, N.C., and Rivera said he expects Kaepernick will be on his game — and make it that much tougher on his defense.
“I don’t expect that again,” Rivera said. “I expect the young man to come out and play well. He’s a good football player and he showed it (Sunday) night” against Green Bay.
The 49ers have won six straight games, including a 23-20 playoff win over the Green Bay Packers this past Sunday at Lambeau Field. Kaepernick threw for 223 yards and a touchdown and ran for 98 yards against the Packers.
Over the past six games, Kaepernick has elevated his play, averaging 231 yards passing per game with 11 touchdowns and three interceptions.
Rivera says the 49ers are a much better team than they played back in November.
“All you have to do is watch the way he has played down the stretch,” Rivera said. “We caught them at a good time and it turned out in our benefit.”
Perhaps.
Kaepernick was without wide receiver Michael Crabtree in the last meeting and tight end Vernon Davis left early in the game with a concussion. Crabtree had eight catches for 125 yards in the win over Green Bay.
Mario Manningham led the 49ers with 30 yards receiving in the last game against Carolina and San Francisco’s longest pass play went for 14 yards. The 49ers managed just 10 first downs against Carolina and failed to get into the end zone.
“We owe them,” Kaepernick said Sunday of the Panthers.
San Francisco’s win over Green Bay served as a stark reminder of what not to do while defending Kaepernick.
Defensive coordinator Sean McDermott pointed to a crucial moment on the final drive when the outside edge rusher lost containment and Kaepernick scooted free for an 11-yard gain on third-and-8. Five plays later Phil Dawson kicked the winning field goal as time expired.
McDermott said his defense did a nice job of staying in their rushing lanes and keeping Kaepernick in the pocket last time around, sacking him six times.
He said that will be key on Sunday, too.
“I thought our guys played aggressive up front,” McDermott said. “We played discipline. The coverage was good enough at times to get him to hold the ball.”
Defensive tackle Dwan Edwards also stressed the importance of not trying to do too much outside of the Panthers’ scheme.
“Our defensive ends can’t get too far past the quarterback or he takes off and it gives him huge lanes,” Edwards said. “It’s important that everyone stays in their lanes and when someone does get out of their lane we have to cover that up quickly.”
McDermott said the last game against the 49ers felt like an old school NFC playoff slugfest.
But like Rivera, he’s not so sure it will be such a low-scoring affair this time around.
“You just never know in the playoffs,” McDermott said. “You saw the scores this past weekend. You had some halves where teams were completely shut down, and then they came out and exploded. … I’m sure they’re a better football team and I’d like to believe we’re a better football team as well.”