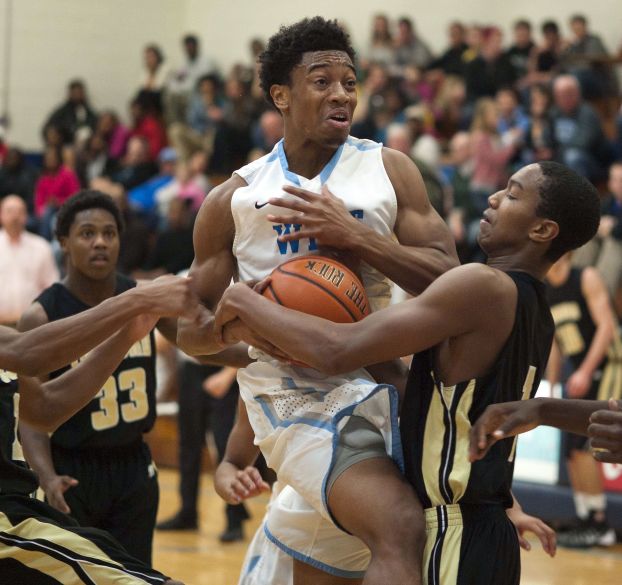 MT. ULLA — Believe it or not, West Rowan played a fairly solid basketball game Friday night. The Concord Spiders were just nearly perfect.
Concord firmly established itself as the team to beat in the South Piedmont Conference, rolling up an impressive 106-75 win at West Rowan’s gym. The scoring punch of Connor Burchfield and Greg Childress plus relentless defensive pressure from start to finish was more than the Falcons could ultimately handle.
“They are a very good basketball team,” West Coach Mike Gurley said of the Spiders. “But overall I thought we played pretty well. We let them stun us with some quick hitters and we didn’t make our free throws but they are a very good team.”
Concord (6-0, 8-2) set a frenetic pace from the opening tip with their pressing, scrambling, trapping, shot challenging defense. The Falcons (4-2, 8-5) responded and kept pace for about two and a half quarters but finally wore down, yielding 17 steals and a dozen turnovers.
“We are trying to play that style,” Spider first year coach George Walker noted. “Once we got our football guys and got our legs back we are trying to get to 32 minutes of fast paced basketball.”
Because their football team made a run all the way to the State championship game, the basketball Spiders had a limited early season and did not play in a holiday tournament. All they have done for the past two weeks is practice with their full squad. “I think that really helped us a lot, “ Walker said.
Burchfield, a 6-4 senior committed to William and Mary, scorched the Falcons for 28 points, both from long range and driving lay-ups off steals. Point guard Greg Childress was close behind with 24 points, also with threes and transition buckets. Star freshman forward Ty-Shon Alexander dominated inside with 19 including a second half power dunk.
After taking a slim 28-21 lead in the first quarter, Concord gained some separation in the second period by going up as many as 14. But Falcon Najee Tucker banged inside for 10 of his game high 20 points in the period to keep his team in the game.
The tide started to turn for Concord when Burchifield canned a 30 footer at the halftime buzzer to make it 54-41. They opened the third quarter with a scoring spurt led by Alexander that expanded the lead to 64-55 midway in the period.
Three consecutive steals in the final two minutes by Burchfield, including another buzzer beater made the margin 82-64 heading into the fourth period.
The Spiders were destined for the century mark on this night and achieved it by outscoring West 24-11 in the final quarter. Reserve Logan Sedergren hit a lay-up at the 3:07 mark to make the score 101-73.
Free throws played a big role in the physical game with Concord nailing an amazing 25 of 27. West meanwhile struggling at the strip managing only 7 of 24 and it cost them.
On a positive note, West sharpshooter guard Seth Martin regained his shooting touch after a tough holiday basketball run. He canned four against the Spiders and had 14 points. “It was good being back in my own gym tonight where I know how to shoot and keep my confidence up,” he said. “Concord just outplayed us tonight.”
Falcon guard Celexus Long also had a solid offensive night with 10.
“We will go forward from here and get better,” Gurley stated. “I can’t wait to play them again because we want to see if we have gotten better.”
CONCORD (106) — Burchfield 28, Childers 24, Alexander 19, Twigger 6, Black 6, Nasirildeen 6, Burk 5, Pruette 4, Lynch 2, Cassell 2, Monroe 2, Sedergren 2.
WEST ROWAN (75) — Tucker 20, Martin 14, Long 10, Parks 9, Weeks 6, Hassard 5, Reddick 4, Wood 3, Joseph 2, Caldwell, 2, Valle.
Concord 28 26 28 24 — 106
W. Rowan 21 20 23 11 — 75