Smith embraces past, excited for future 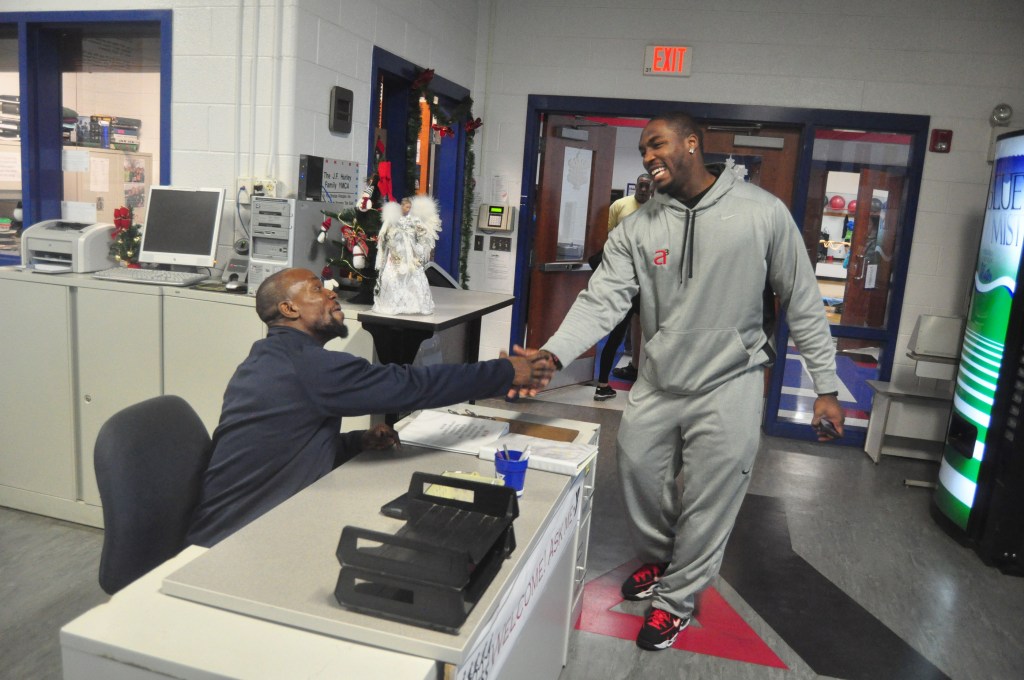 Chris Smith hasn’t forgotten his roots.
There’s still a bit of Rowan County twang in his booming voice and he’s brought those small-town sensibilities out to the Midwest. There’s still a relationship with West Rowan teammate K.P. Parks. There’s still a trip to the Moir Christmas Classic during his holiday break. Smith knows the receptionist at the Hurley YMCA is no better then him, no less worthy of his acknowledgment and some friendly banter.
In a few months, Smith will have a higher profile than many who played on the same field he did behind WRHS.
Before each game at Arkansas, Smith writes AGS on his wrist tape. That’s the initials of his one-year old daughter, Alaina. The tape on the other wrist features RG, a tribute to former Post sports editor Ronnie Gallagher who helped Smith open up and become more personable.
Three other letters that Smith’s life could be impacted by very soon?
NFL.
It’s a transformative time for Smith, who has signed with Allegiant Athletic Agency to represent him for the draft in May. The 6-foot-2, 268-pound defensive end is projected as high as a second-round pick by some draftniks. He received an invite to the scouting combine Thursday after four seasons of going hogwild on SEC backfields.
“It’s here,” Smith said. “There’s still a lot of work to be done. I just thank God for people down the road for seeing the potential in me. I didn’t see it in myself.”
You’ve probably heard the story about Smith wanted to play basketball growing up and didn’t come out for football until sophomore year. That season, then West defensive coach Stevie Williams pulled Smith aside after an intense practice where Smith said Williams must have yelled at him 1,000 times.
“He’s said the reason I stay hard on you is because you can make a lot of money doing this,” Smith said. “Him and coach [Scott] Young, I thank God they stayed hard on me.”
Smith left this week for IMG Academy in Bradenton, Fla., for an intensive eight-week session where football will be king. IMG will prepare Smith for the upcoming draft and combine workouts. During holiday break, Smith squeezed in as much leisure time as possible with family and friends. Smith was hanging out with Parks at the Moir Christmas Classic and could be seen chatting with anyone interested There’s no time for that at IMG.
“You know how you go to school for work,” Smith said. “This is like the University of Football. You eat, sleep and breathe football.”
Smith was second-team All-SEC and had 8.5 sacks in a 4-3 defense at Arkansas under new defensive coordinator Chris Ash. This came after a 9.5-sack, 13 tackles for loss season in 2012. The Razorbacks, who won the Cotton Bowl in 2011, missed a Bowl appearance for the second-straight year. The Hogs lost nine straight to end the season to finish a disappointing 3-9. Smith still finds merit in the season, which he hopes cemented his case to be an NFL player.
“Like my Dad always said, ‘the film is still running,’” Smith said. “No matter what the score is, go out and play your hardest.”
Smith will play in the Senior Bowl on Jan. 25 in Mobile, Ala. The Jacksonville Jaguars coaching staff will coach the South squad in the game and the Atlanta Falcons coaches will lead the North.
“NFL scouts are going to be coaching you,” Smith said. “They say the practices are more important than the game. One-on-ones are going to be a big deal. We’re going to do a lot of fun things, but it’s a business trip.”
The NFL Draft combine, now as important as ever for incoming players, is in February. Teams generally hold pro days, where NFL scouts come to view prospective players at their school, in March.
Smith has nine hours left for a sociology degree and hopes to finish up by May or the fall. His minor is sports management.
When the time comes for the draft, Smith says he’ll stay at home and watch it with his family. Not bad for a guy who, not long ago, didn’t want anything to do with football. Now he’s a few months away from playing with the best.
“It’s like my agent says, ‘only one percent from high school make it to the pros,’” Smith said. “I know I’m fortunate.”